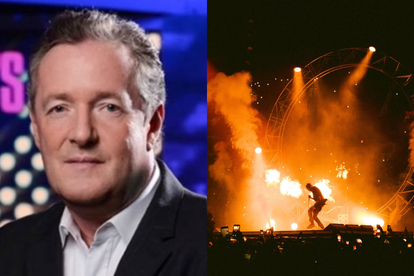 Piers Morgan is one of the thousands of people who have shared what they think about the Astroworld Festival tragedy that left eight dead and hundreds more injured. According to Morgan, Travis Scott repeatedly proved that he did not care about the safety of his fans and is both ‘arrogant and shamefully reckless.’

British broadcaster Piers Morgan has never been one to hold his tongue. Just a few months earlier he was engaged in a Twitter war with rapper Nicki Minaj and now he has aimed his guns at another US rapper, Travis Scott.

Piers shared some harsh words with the rapper after eight people died at his Astroworld Festival last week after allegedly being encouraged by the rapper to rush forward toward the stage.

Chaos ensued shortly after as the large crowd surged forward resulting in people collapsing and being trampled on. While all of this was happening, Travis continues to perform despite people from the crowd begging him and the security officials present at the event to stop the show.

Writing for MailOnline, Piers slammed Travis’ who later that evening shared a video of himself expressing how devasted he was by the turn of events and tragedies that took place at the festival.

According to Piers, Travis’s shock in the video was ‘a load of disingenuous self-protective claptrap’.

He also went on to list how on several occasions Travis encouraged his fans to ignore security officials and climb over barricades that are meant to ensure things like stampedes and crowd surges do not happen at these events.

“All my real ragers jump the barricade right now!’ Scott yelled. ‘Let’s go. Come over. I want chaos,” he told a crowd at the Lollapalooza festival in Chicago.

In fact, Travis paid a $7,465.31 fine after encouraging his fans to rush the stage and bypass security at a concert at the Walmart Music Pavilion in Arkansas.

His behaviour proves to have been reckless all along and this is something Piers says put his fans in danger at the Astroworld fest.

“For years, Travis Scott has extended his middle finger to crowd safety and security. On Friday night, that shamefully reckless attitude to the welfare of his own fans led to a deadly disaster. He can pretend he’s shocked and can’t believe it happened,” writes Piers.

Meanwhile, fans find proof that chaos can be halted at concerts

Following the tragic events that took place at Travis’ Astroworld Festival, fans have since taken it upon themselves to find clips of other artists stopping their performances to ensure the crowd stays controlled.

In various clips, artists such as Adele, Lupe Fiasco, Dua Lipa, and Billie Eilish are seen halting their shows as they tend to something happening in the crowd.

In this clip, Linkin Park also proves that crowd control can be handled from the stage.

Here Adele notices that someone passed out and immediately calls for help mid-performance.