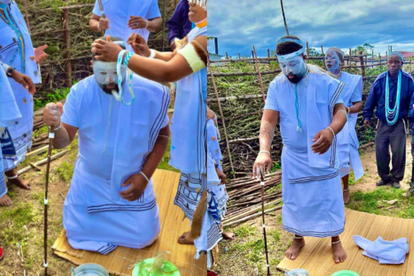 Luyanda Potwana is now a sangoma. Images via Instagram: @LuyandaPotwana

Luyanda Potwana is now a sangoma. Images via Instagram: @LuyandaPotwana

Nyan Nyan presenter Luyanda Potwana has answered his ancestral calling. Heading online, Potwana shared snaps of himself during the ceremony and left many of his fans surprised but seemingly pleased as many of them headed to the comment section where they wished him well.

Over the last few years, more and more South African celebrities are answering their ancestral callings and becoming sangomas. The latest celebrity to join the ever-growing list of celebrity gogos is actor and presenter Luyanda Potwana.

Taking to his Instagram page, Luyanda shared snaps of himself during his ukuthwasa initiation while sharing the following caption:

The news is met with loud applause

After spotting the post, many of his loyal fans headed to the comment section where they shared thoughtful messages of support with Luyanda who also recently shared that he was heading to the University of London to pursue a Bachelor of Psychology.

“Congratulations and I pray our ancestors to protect you.”

“I respect you for this journey.”

Kelly Khumalo, Tall A$$ Mo, and Boity Thulo are also on the list

All of these local celebrities have headed online to share the news with their followers who have admittedly become a bit curious as to why celebrities are suddenly rushing to become sangomas.

According to Gogo Dineo Ndlanzi, a sangoma and spiritual teacher, the sudden influx of celeb sangomas are due to the fact that more and more people in South Africa are becoming more conscious about their Africanism.

“There is a movement of awakening consciousness among young people. People are starting to question their identity outside religious systems” says Ndlanzi in a Glamour article.

She also added that social media has also played a role in popularising African spirituality.