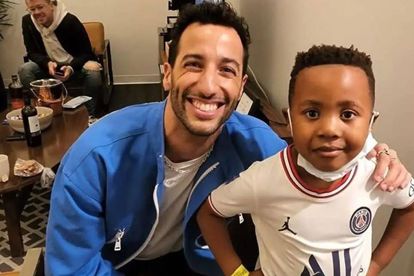 Alakhe meets Formula One driver Daniel Ricciardo on the set of The Daily Show.
Image via Twitter
@anele

Alakhe meets Formula One driver Daniel Ricciardo on the set of The Daily Show.
Image via Twitter
@anele

There’s no doubt in our minds that Alakhe, the son of media personality Anele Mdoda, is the envy of all his primary school friends.

The six-year-tot got to holiday with celebs like Trevor Noah, jet off to New York on a whim with his famous mom, and be a VIP on the set of The Daily Show, but he also has his own YouTube channel called Alakhe’s World.

But if that’s not enough to have you green with envy, the tiny tot – who is a Formula One fanatic – had the privilege of meeting a well-known driver – Daniel Ricciardo!

Alakhe had the amazing opportunity to meet one of his F1 idols whilst visiting uncle Trevor Noah on the set of The Daily Show.

Whilst there, Alakhe was introduced to guests like Burna Boy and other Comedy Central comedians.

But it was Daniel, who really had the racing car fan intrigued. In a clip recorded by mom Anele, Alakhe is seen quizzing the then-Red Bull driver on his 2016 misfortune during the Monaco Grand Prix.

During the race, Daniel lost out to Mercedes driver Lewis Hamilton after a pit stop took too long.

“That was a dark day”, claimed the 32-year-old Italian-Australian racing driver.

The clip was posted on the F1 Instagram page and has been viewed almost 6 million times with half a million views.

And followers of the account had nothing but praise for pint-sized future star Alakhe.

@Oswaldka94: “Little man is going to be the new Sebastian Vettel”

@Thevanfaux: “That kid has a way with words already!”

On Lap 32 of the race, Daniel pulled over to do a pit stop, but his crew was not ready for him, resulting in a lengthy delay

As a result, Lewis Hamilton took the win and Daniel came a dejected second.

In 2020, the now McLaren driver took to Twitter to relive the moment and the anguish he felt.

He wrote: “Even four years on, I remember this day in so much detail, it’s like a video in my mind. I can picture myself driving through the corner before the tunnel after THAT pit stop and I was so angry.

“I didn’t want to talk to anyone afterward, I certainly didn’t want any sympathy… it was just pure rage.

“I remember standing on the podium with Lewis, he’d won a race that I had under control… I just didn’t want to be there.”