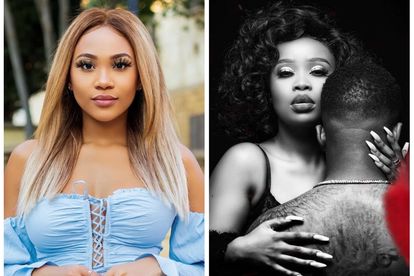 The drama between DJ and influencer Sithelo Shozi and her children’s father Andile Mpisane continues to thicken after Andile’s sister Sbahle threw shade at Sithelo in a social media post. Sbahle’s post resulted in Sithelo retaliating but quickly removing her tweet shortly afterwards. And now it seems like Andile’s newest baby mama and wife Tamia Mpisane is also itching to say something and confused many of her followers with a rather cryptic tweet of her own.

While Sithelo battles her children’s father and his family, his wife Tamia has remained quite still choosing not to share her opinion on the matter.

Earlier today however, Mrs Mpisane shared what many believe is a subtle yet powerful dig at the Sithelo vs MaMkhize and Andile saga.

The post was almost instantly analysed by Twitter users who wondered out loud if the “hmm” was directed at the ongoing feud between her husband’s family and his ex.

After seeing Tamia’s tweet, many people questioned the reason behind it, one user advised Tamia not to get involved in the mess, “ Wena humble soul just don’t even bother yourself with the drama with the #shozi sisters. They will beat you with experience. Stay beautiful and loveable as you are”

Tamia realised what people were thinking and quickly went on to say that she was just a little “confused” by today’s weather.

“This weather is just confusing me,” she wrote covering what appeared to be a very clear bit of shade.

Meanwhile, many are waiting to see what will unfold next in the world of MaMkhize, her son and his estranged ex-girlfriend.