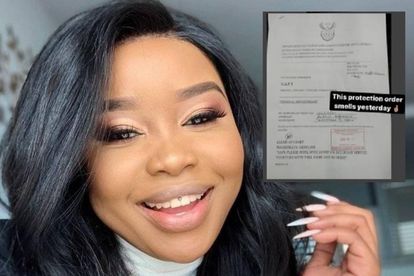 A protection order allegedly filed by Andile Mpisane against his ex-girlfriend Sithelo Shozi has emerged – but the latter has questioned its authenticity.

On Thursday the drama between the exes took a twist when the official document trended on Twitter. In it, Andile accused Sithelo of being “violent and aggressive”.

Earlier this week, Sithelo accused Andile Mpisane of assaulting her during their relationship. A day later, Andile’s mother MaMkhize issued a statement rubbishing the claims, which she labelled “false and defamatory”.

On Thursday evening, celebrity blogger Musa Khawula tweeted pictures of the alleged protection filed by Andile Mpisane. According to the document, it was filed on 17 December – which happened to be the wedding day for Andile and his wife Tamia.

Part of the protection order read: “Sithelo who is my ex-girlfriend has been abusive to me since we broke up”.

The Royal AM chairperson claims Sithelo allegedly assaulted him on several occasions, including once shattering his windscreen. He added: “She punched me, kicked me. She is a violent and aggressive person. Phoning my friends and family, degrading me, tarnishing my name…calling me f*king b*stard”.

Andile added that he wanted Sithelo to “stay away, stop harassing, stalking me”.

Taking to her Instagram Stories, Sithelo tweeted messages of support from her fans and followers. Many of the fans questioned the timing of Andile Mpisane’s court protection order.

One shared: “This screams guilty for Andile Mpisane. MaMkhize stated she wasn’t aware of any abuse, now there is a protection order? We’re not stupid. This protection order smells yesterday.

“Let’s not forget money can buy your protection order in 24 hours”.

TWEEPS ARE CONFUSED AT LATEST DEVELOPMENT

On Twitter, tweeps had mixed reactions to the drama surrounding Andile Mpisane, MaMkhize and Sithelo.

Some alleged that Andile recently had the protection order filed.

@Que_DBN: “Remember Andile is monied and well connected, you may found out that this protection order was done and approved yesterday”

@TacTebogo: “When you have money you can do a protection order in July 2022 but stamps saying December 2021”

@NolwaziMnisi8: “MaMkhize said there was never an assault witnessed or heard of at her house between Andile and Sithelo…if this is real why doesn’t Shauwn know about it?”

It's all lies those documents are fresh… pic.twitter.com/seAHj7yBjo

Others pointed fingers at Sithelo.

@Mxbeez: “It is unfortunate that she was being abused but all of this could’ve been avoided if Sithelo dated her age mates not 17 year olds”.

The tables are turning pic.twitter.com/pc58f4NQOs

@lovePre75456105: “The fact remains Sithelo and Andile had a toxic relationship hence why they both fought each other physically”