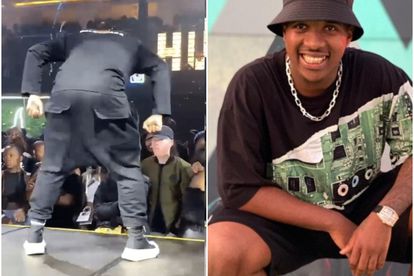 A clip of Andile Mpisane performing in front of a disinterested crowd has gone viral.
Image via Instagram
@andilempisane10

A clip of Andile Mpisane performing in front of a disinterested crowd has gone viral.
Image via Instagram
@andilempisane10

Andile Mpisane has been mercilessly mocked after a music performance went horribly wrong.

The Royal AM soccer club chairperson, who is also a music artist, trended on Twitter over a clip of his performance this week.

NO LOVE FROM THE CROWD

In the clip, club-goers were seen staring at the 21-year-old with blank faces as he performed with his backup dancers along with blaring music.

In February this year, Andile Mpisane was trolled over his participation in the Legends of The Street Tour alongside Rick Ross, 2 Chainz, Gucci Mane, and others. A clip of his performance also went viral.

The only son of Shauwn Mkhize also courted controversy earlier this year after he revealed he had been signed to Def Jam Recordings.

Andilefound himself and the clip attracting attention for all the wrong reasons.

Here’s what tweeps had to say about it:

@t_dzyl: “Andile Mpisane can stop embarrassing himself now, the music thing is not working out”

@Mfoka_Jobe: “I so wish I can meet Andile and advise him to use his money to fund young upcoming artists who are talented and build something he will be proud of not this nonsense of abusing his connections and platforms”

@audreyparklane: “Andile Mpisane should just be a socialite. Just be famous for being rich and clubbing. Cause hayi, this other stuff is not working”

@mihlalig__: “I think Andile pays to get booked no ways”