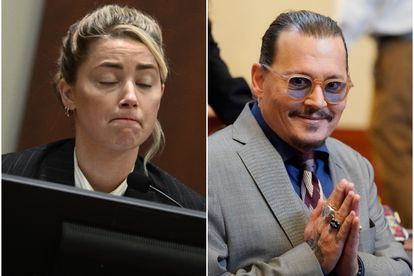 Amber Heard could face charges of perjury after she claimed she had not yet donated her $7million divorce settlement from Johnny Depp to charity.
Image by Brendan Smialowski, Steve Helber/ AFP

Amber Heard could face charges of perjury after she claimed she had not yet donated her $7million divorce settlement from Johnny Depp to charity.
Image by Brendan Smialowski, Steve Helber/ AFP

Amber Heard has been accused of lying under oath after she claimed that she had “not yet” donated her $7 million divorce settlement from ex-husband Johnny Depp to charity.

The confession was heard in court on Tuesday 17 May amid the actress’s defamation trial against her former spouse.

Amber and Johnny are embroiled in a $100 million joint defamation lawsuit after the latter accused her of “ruining” his reputation. This, after his ex-wife claimed in a Washington Post op-ed that she was a “domestic abuse survivor” during their two year marriage. In return, Amber is counter-suing Johnny after his legal team labeled her claims an “elaborate hoax”.

In 2017, Amber Heard publicly pledged to split her entire $7million divorce settlement equally to two charities. They were the Children’s Hospital in Los Angeles and the American Civil Liberties Union.

But during her cross-examination on Tuesday, the court heard how Amber had “not yet” made the donations. This, despite telling a UK court in 2020 in a libel lawsuit that she had. According to Insider, Amber also claimed in an interview that she had already donated the funds.

Two years ago, Amber said in a sworn statement that the “entire amount of my divorce settlement was donated to charity”.

When questioned about the money by Depp’s lawyer Camille Vasquez in a tense stand-off, Amber rescinded on her earlier claims.

To which Amber Heard replied: “I have not been able to fulfill those obligations yet”. She also responded “not yet” when asked directly about the money.

According to Amber, she claimed the delay was “because Johnny sued me for $50million in March of 2019”. However on Monday, Amber testified that she had received the full amount in October 2018, reported Deadline.

Camille then fired back that the Aquaman actress had been paid the money for months before the lawsuit. Amber – who has paid just a small portion of the money to the charities –  added: “I still fully intend on honoring all of my pledges. I would love him to stop suing me so I can.”

Speaking to MailOnline he said: “While it may not be a central issue to the case [the donations], perjury is the single biggest threat and cuts to the core of our justice system. So the police may be invited to investigate to show that any member of the public who lies to the court can be prosecuted for perjury”.

Amber Heard’s statement was made during a libel lawsuit by Johnny Depp in 2020 against tabloid The Sun. This, over an article that called him a “wife-beater”.

Meanwhile, Amber Heard is being investigated over more claims of perjury, this time in Australia.

According to Newsweek, the actress may face prosecution by Australia’s Department of Agriculture, Water and the Environment (DAWE) after she reportedly lied about bringing her two dogs into the country in 2015.

Whilst visiting her then spouse who was filming the fifth Pirates of Caribbean in Australia, actress reportedly claimed she had pursued proper documentation permitting her pets to enter the country. However this was disproved by DAWE, who have a strict policy which claims that foreign pets must be quarantined for at least 10 days before entering the country.

The actress alongside her husband made a video apology over her actions and were seemingly let off the hook.

But her “lies” may be coming back to haunt her again. When asked about for an update following their 2021 statement on pursuing fresh charges, a DAWE stated that they were looking into “allegations of perjury by Ms. Heard”.