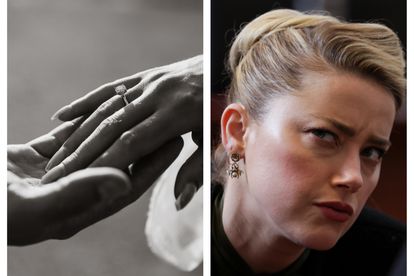 A Saudi man has offered to marry Amber Heard in the wake of her million dollar judgement to ex-husband Johnny Depp.
Image via Pixabay/EVELYN HOCKSTEIN, AFP

A Saudi man has offered to marry Amber Heard in the wake of her million dollar judgement to ex-husband Johnny Depp.
Image via Pixabay/EVELYN HOCKSTEIN, AFP

A male fan of Amber Heard has attempted to shoot his shot with the actress with an online marriage proposal, “since all doors are closing on you”, he claims

In a clip that has gone viral on social media, the unidentified man proposes to put a ring on the finger of the Aquaman star. And the man claims he’s “better” than her ex-husband Johnny Depp too!

ALSO READ: Pay back the money: How will Amber Heard afford millions in damages?

A screenshot of a voice note from the man to Amber Heard’s Instagram DM’s has been shared online.

Translated into English, the man promises to care for the star, who has been ordered to pay $8 million in damages following her defamation lawsuit against Johnny Depp.

He says: “Amber Heard… since all doors are closing on you, you have no one except me to take care of you. I’ve noticed that some people hate and bully you, therefore, I decided to marry you. May Allah bless us both. You are a blessing but people don’t appreciate that. I am better than that old man”.

Meanwhile, a $1 million GoFundMe page has been shut down after it attempted to raise funds for Amber Heard .

This follows reports from Amber’s attorney who claims the star is unable to pay the judgment due to Johnny Depp . As a result, her team will be formulating an appeal.

MailOnline last week reported that should Amber Heard not be able to pay the damages, Johnny Depp may look into her financial affairs and take action for her future wages to be garnished.

In response, the GoFundMe page – titled “Justice for Amber Heard” was reportedly started by a fan to help her raise the cash. The page read: “The trial was a disgrace. I believe Amber, and social media protected the abuser. The judgment exceeds her net worth. It’s so sad that he was able to get away with the abuse. The judgment furthers that abuse. If you can please help her.”

According to the crowdfunding website, the page was not affiliated with Amber Heard and was deemed “fake”.

A statement from a representative to Insider that GoFundMe was committed to  “removing any fundraisers unless there’s a direct connection and the fundraiser has been authorized by the recipient of the funds”.

It added that the “top priority is to keep our community safe and protect the generosity of our donors.”