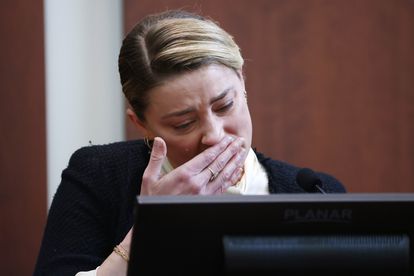 US actress Amber Heard testifies at the Fairfax County Circuit Courthouse in Fairfax, Virginia, on May 5, 2022.
Image by JIM LO SCALZO / AFP

US actress Amber Heard testifies at the Fairfax County Circuit Courthouse in Fairfax, Virginia, on May 5, 2022.
Image by JIM LO SCALZO / AFP

A suspicious clip of Amber Heard in court has raised alarm bells from tweeps who are suggesting she may have snorted cocaine during her live testimony.

The clip – which has gone viral on social media – shows the actress appearing on the witness stand. But it is her mannerisms – like sniffing into a tissue, and wiping her nose repeatedly – that have raised eyebrows.

Amber and Johnny are embroiled in a messy $100 million defamation case in the Fairfax, Virginia Court. The former Pirates of the Caribbean actor is suing his ex-wife over claims she made in a Washington Post op-ed in which the claimed to be a victim of abuse during their two-year marriage. In return, Amber is counter-suing Johnny after his legal team labeled her claims an “elaborate hoax”.

In the clip, Amber Heard takes to the stand on Thursday 5 May, during the second day of her examination.

With a solemn face, Amber pulls out a tissue, in which she is seen seemingly fiddling with her left nostril before she wipes her nose twice and sniffs multiple times.

And the Aquaman actress is filmed repeating the suspicious act later during her testimony.

The mannerisms, claim tweeps, suggest she has snorted the A-class drug in front of the courtroom.

Even television reporter Greg Kelly admitted the move looked suspicious. He tweeted: “WOW! Looks like Amber Heard is SNORTING COCAINE right in front of the Judge and Jury and the Bailiff. What happens now? Mistrial? You can’t do BLOW in the courtroom!”

Here’s what other tweeps had to say:

@enchantedharlot: “Anyone who has ever done it knows EXACTLY what she just did. There is no doubt about it”

@StaroT93:”I f**king knew it!! I was watching last night and thought her jaw was all over the place”

@jraymond0412: “I mean I’ve done my fair share of coke, you would lose so much in a loose napkin like that as well as the fact that you might get coke all-around your nose in court, I don’t know. Possible not probable”

@AjaxtheGriff: “It looks a LOT like it, but I have too hard a time believing she couldn’t have just done it in the bathroom beforehand. Way too much effort/risk without getting caught”

Whilst Amber Heard’s legal team has painted Johnny Depp as a person who openly struggles with substance abuse, the actress reportedly has her own skeletons too.

According to former nurse Erin Falati who appeared in the courtroom via video link, Amber Heard had “an addiction to cocaine and liquor”.

Notes read by the nurse revealed that Amber had admitted she “ingested mushrooms and MDMA simultaneously while also consuming alcohol” on a trip to the Coachella music festival in April 2016.

The actress also told the nurse that she was “high for at least 24 hours straight”.