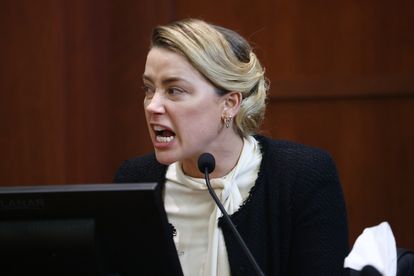 US actress Amber Heard testifies at the Fairfax County Circuit Courthouse in Fairfax, Virginia, on May 5, 2022. –
Image by Jim LO SCALZO / AFP

US actress Amber Heard testifies at the Fairfax County Circuit Courthouse in Fairfax, Virginia, on May 5, 2022. –
Image by Jim LO SCALZO / AFP

It’s been a case of art imitating life for Amber Heard after she took to the stand to testify this week in a joint case of defamation against ex-husband Johnny Depp.

Amber and Johnny are embroiled in a messy $100 million defamation case in the Fairfax, Virginia Court. The former Pirates of the Caribbean actor is suing his ex-wife over claims she made in a Washington Post op-ed in which the claimed to be a victim of abuse during their marriage. In return, Amber is counter-suing Johnny after his legal team labeled her claims an “elaborate hoax”.

This week Amber Heard was called to testify on allegations Johnny Depp physically and sexually abused her throughout their marriage. The couple were married from 2015 to 2017 and split amid allegations of abuse, infidelity, and substance abuse.

According to social media users, Amber Heard’s testimony was riddled with quotes from movies.

In a Twitter thread posted on Thursday 5 May, one tweep accused Amber of “stealing from film, TV and books” during her testimony. The tweep posted: “If you were watching Amber Heard and felt like some of those lines felt strangely familiar, they are.”

The tweep quoted a segment from Amber Heard’s testimony in which she reportedly quoted lines from the 1999 film The Talented Mr. Ripley, starring Gwyneth Paltrow, Jude Law, and Matt Damon.

Although their is no video evidence to back up the claim, Heard is allegedly quoting the character, Marge Sherwood (played by Paltrow) from the movie, in which she said: “The thing is with Johnny (Dickie). . . it’s like the sun shines on you, and it’s glorious. And then he forgets you, and it’s very, very cold.”

Other stark similarities, claim tweeps, include quotes and mannerisms such as:

WHO IS TELLING THE TRUTH?

It’s no secret that the Johnny Depp vs Amber Heard case has divided fans around the world. Whilst some think that Amber Heard is possibly a victim of spousal abuse, others suggest she is “acting” under oath.

During Thursday’s proceeding’s tweeps accused Amber of “acting” after a clip of her almost crossing paths with Johnny Depp in the courtroom went viral.

Speaking to People magazine, a spokesperson for Johnny Depp claimed Amber Heard was delivering “the performance of her life” during her examination.

The rep added: “While Ms. Heard’s stories have continued to grow new and convenient details, Mr. Depp’s recollections have remained exactly the same throughout the six painful years since her first allegations were made.

“His truth – the truth – is the same no matter the environment in which it has been presented.’

However, Amber Heard’s counsel refuted the claims, adding: “As evidenced by the statement just released, Mr. Depp’s defamation claim is falling apart so rapidly that his counsel are turning from prosecutor to persecutor.

“Mr. Depp’s behavior in this trial has been as pitiful as it was in their marriage”.

In the midst of all the back and forth between camps, media personality Piers Morgan reminded tweeps that both Johnny and Amber are seasoned actors.