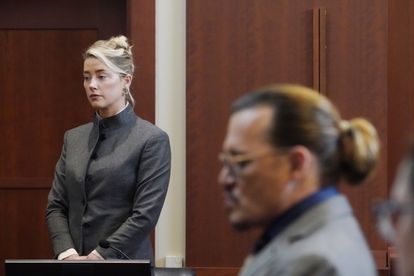 Amber Heard alleges that her dog defaecated in the bed she shared with ex-husband Johnny Depp during her testimony mon Monday 16 May.
Image by Steve Helber / AFP

Amber Heard alleges that her dog defaecated in the bed she shared with ex-husband Johnny Depp during her testimony mon Monday 16 May.
Image by Steve Helber / AFP

The actress made the revelation during her cross-examination at the Fairfax, Virginia court amid the former couple’s $100 million defamation trial.

The former Pirates of the Caribbean actor is suing his ex-wife over claims she made in a Washington Post op-ed. In it, she claimed to be a victim of abuse during their two-year marriage. In return, Amber is counter-suing Johnny after his legal team labeled her claims an “elaborate hoax”.

AMBER HEARD AND THE POOP IN THE BED RUMOUR

Earlier on in the trial, Johnny Depp alleged that Amber Heard had defaecated in their matrimonial bed. This, he claims, was following a volatile argument between the couple following the actress’s 30th birthday in April 2016.

According to the A-lister, the faeces was discovered by Johnny’s bodyguard Sean Bett who was at the couple’s Los Angeles penthouse.

At the time, Johnny and Amber were separated and the former was hoping to stop over at the home to pick up some clothes. This, whilst Amber was away at the Coachella music festival.

He said in court of the discovery: “He [the bodyguard] showed me a photograph on his telephone of… it was a photograph of our bed, and on my side of the bed, was human faecal matter.

“My initial response to that was, I mean… I laughed. It was so outside. It was so bizarre and so grotesque that I could only laugh. So I did not go down there that day.”

BLAME IT ON THE DOG?

Clearly unamused, Amber Heard shared her version of what had transpired during her testimony on Monday 16 April.

Speaking on the stand, she said the incident was anything but funny. She said: “First of all, I don’t think that’s funny. I was not, also, in a pranking mood. My life was falling apart.”

She continued: “I had just been attacked on my 30th birthday by my violent husband, with whom I was desperately in love and knew I needed to leave. It was not really a jovial time, and I don’t think that’s funny period. That’s disgusting”.

Amber then claimed that the culprit was actually one of the couple’s Yorkshire dogs named Boo. According to the actress, the dog suffered from lifelong “bowel control issues” after eating a bag of weed belonging to Johnny Depp as a puppy.

However, Johnny Depp disputed Amber’s claims of their dogs being to blame.  He said in a sworn statement: “They’re teacup Yorkies. They weigh about 4 pounds (1,8 kg)  each. I lived with those dogs. I picked up their funk. It was not the dogs.”