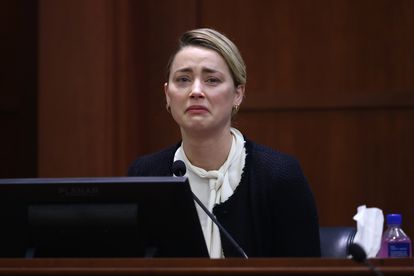 US actress Amber Heard testifies at the Fairfax County Circuit Courthouse in Fairfax, Virginia, on 4 May , 2022. – Actor Johnny Depp is suing ex-wife Amber Heard for libel after she wrote an op-ed piece in The Washington Post in 2018 referring to herself as a public figure representing domestic abuse. Photo: JIM LO SCALZO / POOL / POOL / AFP

US actress Amber Heard testifies at the Fairfax County Circuit Courthouse in Fairfax, Virginia, on 4 May , 2022. – Actor Johnny Depp is suing ex-wife Amber Heard for libel after she wrote an op-ed piece in The Washington Post in 2018 referring to herself as a public figure representing domestic abuse. Photo: JIM LO SCALZO / POOL / POOL / AFP

Actress Amber Heard testified on Wednesday that her ex-husband, “Pirates of the Caribbean” star Johnny Depp, was obsessively jealous and would punch walls and slap and hit her in drunken rages.

Heard, taking the witness stand in the defamation suit filed against her by Depp, recounted the heady early days of their relationship for the jury and the later instances of alleged physical abuse.

“He was the love of my life. But he was also this other thing. And that other thing was awful.”

The 58-year-old Depp filed suit against the 36-year-old Heard over an op-ed she wrote for The Washington Post in December 2018 in which she described herself as a “public figure representing domestic abuse.

WHO IS AMBER HEARD?

Heard, who had a starring role in the movie “Aquaman,” did not name Depp in the op-ed, but he sued her for implying he was a domestic abuser and is seeking $50 million (about R779 million) in damages.

The Texas-born Heard countersued, asking for $100 million (about R1.5 billion) and claiming she suffered “rampant physical violence and abuse” at his hands.

Heard said she and Depp had a “whirlwind romance” during a 2011 press tour for “The Rum Diary,” a film they made together.

“I fell head over heels in love with this man,” she said. “When I was with him I felt that, you know, electricity in my body. I felt like butterflies. I couldn’t see straight.”

“When he first started drinking, I didn’t really think much of it,” she said. “He would disappear and then he’d come back. He’d just be different.”

She said Depp hit her for the first time after she laughed at one of his tattoos. “He slapped me for no reason,” she said, choking up on the stand.

Depp was jealous and suspicious of her friends and fellow actors, she said.

“As soon as it seemed as though I had convinced him of one there was somebody else he was sure I was sleeping with.”

“Accusations, accusations and then he would explode,” Heard said. “He would throw a glass, or turn over a table and then would hit the wall and then hit the wall really close to my head.”

She said Depp had slapped and hit her on a number of occasions and recounted a March 2013 argument between the pair.

“Johnny slapped me. I walked away from him and that made it worse,” she said. “We got into a shouting match. I don’t know how many times he hit me in the face but I remember being on the floor of my apartment.”

Heard said Depp’s “drinking kind of correlated with the violence.”

Heard said Depp would frequently leave to get sober and tell her when he returned that he had stopped drinking and was “clean.”

Heard told the jury the current trial is the “most painful and difficult thing” she has ever experienced.

“I struggle to find the words for how painful this is. It’s horrible for me to sit here for weeks and relive everything.”

Dawn Hughes, a psychologist, hired by Heard’s legal team testified on Tuesday that the actress suffers from post-traumatic stress disorder (PTSD) as a result of “intimate partner violence” from Depp.

Hughes’ findings contradicted those of a doctor who appeared as a witness for Depp, Shannon Curry, who said the actress does not have PTSD but suffers from twin personality disorders.

Depp, during four days of testimony earlier in the trial taking place in Fairfax, Virginia, denied ever being physically abusive towards Heard and claimed that she was the one who was frequently violent.

His lawyers put experts on the stand who testified that he lost millions because of the accusations, including a $22.5-million payday for the fifth installment of the “Pirates” franchise.

Depp filed the defamation complaint in the United States after losing a separate libel case in London in November 2020 that he brought against The Sun for calling him a “wife-beater.”

Depp, a three-time Oscar nominee, and Heard met in 2009 on the set of “The Rum Diary” and were married in February 2015. Their divorce was finalized two years later.

The trial is set to continue on Thursday with Heard again on the stand.