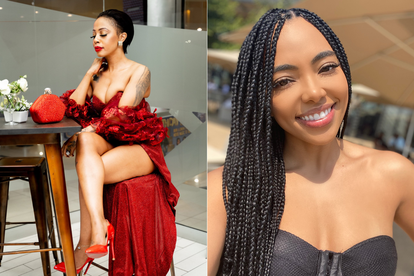 South African Twitter users have been left stunned by Amanda du Pont’s rape allegations against media personality Jub Jub. The actress took to her Instagram account where she detailed how she was raped by the Uyajola 9/9 presenter on more than one occasion. And now, snaps of Kelly Khumalo badly beaten allegedly by Jub Jub, have resurfaced online.

Twitter users have not stopped talking about Amanda du Pont’s allegations against Jub Jub. In an emotional video, Amanda shares how Jub Jub, real name Moremo Catrehoma Alohanie, had forced himself on her numerous times during their two-year relationship.

Amanda’s shocking revelation comes after Jub Jub spoke about their relationship during an interview with Mac G.

And now tweeps have been buzzing as they discuss Jub Jub and Amanda. Many of them are of the opinion that he should be sent back to prison.

ALSO READ: ‘He must go back to jail’: Tweeps on Amanda claiming Jub Jub raped her

One tweep has even shared a photo of Kelly Khumalo, Jub Jub’s ex, who allegedly suffered abuse at his hands. In 2011, Kelly did an interview with Drum and revealed that Jub Jub was indeed physically abusive.

According to a Sowetan Live article, Kelly had even opened a restraining order against Jub Jub even though the two have a child together.

Meanwhile, @Olwee shared the snaps of a bruised Kelly and captioned her post:

“Also, I’m getting this Jub Jub interview from clips. But I don’t seem to see anything about his abuse of Kelly. Did MacG touch on that? Did Jub Jub talk about abusing Kelly and if he’s made any effort to make amends for that? But also, I guess he’s a man in South Africa.”