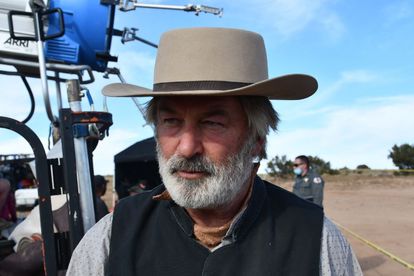 This handout image courtesy of Santa Fe County Sheriff’s Office released 25 April 2022 and part of the investigative files, shows actor Alec Baldwin being processed after the death of cinematographer Halyna Hutchins at the Bonanza Creek Ranch in Santa Fe, New Mexico, 21 October 2022. Baldwin was brandishing a Colt gun during a rehearsal for the low-budget Western being filmed in New Mexico when it discharged a live round, killing Halyna Hutchins. Image: Santa Fe County Sheriff’s Office / AFP

This handout image courtesy of Santa Fe County Sheriff’s Office released 25 April 2022 and part of the investigative files, shows actor Alec Baldwin being processed after the death of cinematographer Halyna Hutchins at the Bonanza Creek Ranch in Santa Fe, New Mexico, 21 October 2022. Baldwin was brandishing a Colt gun during a rehearsal for the low-budget Western being filmed in New Mexico when it discharged a live round, killing Halyna Hutchins. Image: Santa Fe County Sheriff’s Office / AFP

The criminal investigation into the fatal shooting on a US movie starring Alec Baldwin is “nearing completion,” the officer leading the probe said on Tuesday.

NEW FOOTAGE OF ALEC BALDWIN PRACTISING WITH THE GUN

Santa Fe Sheriff Adan Mendoza’s comments come as his department released a trove of materials around the incident that claimed Halyna Hutchins’ life on the set of low-budget Western Rust, including footage of Baldwin apparently practising with the gun that killed her.

“There’s a few things that we’re waiting for in the final FBI report in regards to the analysis of the firearm, the munitions, the latent prints and DNA.

“We’re also waiting on the office of the medical investigator to complete their report and analysis of a little bit more cell phone data.”

Cinematographer Hutchins, 42, died after being hit by a live round that came from the gun Baldwin was holding as he rehearsed on the New Mexico set in October.

Baldwin, who was a producer as well as the star of the movie, had been told the gun was safe and has previously said he did not pull the trigger.

Other clips, apparently from the now-abandoned movie, show the Hollywood star in period dress sitting in the pew of the wooden church and pulling out the Colt gun, which he points in the direction of the camera.

The moment of the shooting, in which director Joel Souza was also hurt, is not seen.

PRODUCERS OF ‘RUST’ INCLUDING ALEC BALDWIN SHOWED ‘INDIFFERENCE’ TO SAFETY

Strict measures are supposed to be in place on movie sets to prevent tragedies, including the exclusive use of dummy or blank rounds in any production involving firearms.

But a health and safety probe by New Mexico officials, which levied a fine of over $136 000 (R2.1 million), said last week that producers had shown “plain indifference” to these protocols.

Mendoza said Tuesday the provenance of the live round that killed Hutchins was “one of the key questions” of the criminal probe.

“Nobody’s come forward and admitted to bringing ammunition to the set,” he said.

The raft of materials includes messages from Hannah Gutierrez-Reed, the young armourer who was responsible for weaponry on the set, that refer to the use of live rounds in another movie.

“That’s concerning because it was just a few months before the production of Rust went into effect,” Mendoza said. “And these are some of the same employees and people that played a role in the Rust production.”

NO DECISION MADE ON ALEC BALDWIN FACING CRIMINAL CHARGES

Mendoza said no decision had yet been taken on whether Baldwin would face criminal charges.

“He was the one that handled the weapon that fired the round that that led to the fatality and the injury,” he said.

“We’re going to work in conjunction with the (district attorney’s) office to determine if there is criminal neglect or criminal charges.”

Although no criminal charges have been filed to date, there have been a series of civil suits.

Hutchins’ family has sued Baldwin and other Rust producers, claiming “substantial” damages for her wrongful death.

Other proceedings have been launched against producers by the movie’s chief lighting technician and script supervisor.

Gutierrez-Reed has sued the film’s ammunition supplier, accusing him of leaving real bullets among the dummy cartridges.

Baldwin told a TV interviewer in December he had been instructed by Hutchins to point the gun in her direction and did not pull the trigger.

“I feel that someone is responsible for what happened and I can’t say who that is. “But I know it’s not me.”