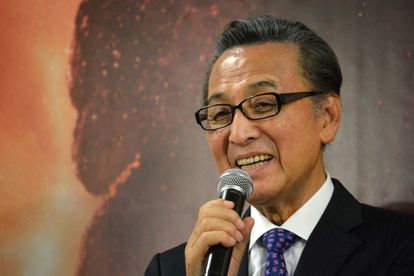 Akira Takarada, who starred in the original 1954 Godzilla and several later films featuring the city-wrecking monster, has died in Tokyo aged 87, according to local media on 18 March 2022. Image: Kazuhiro Nogi / AFP

Akira Takarada, who starred in the original 1954 Godzilla and several later films featuring the city-wrecking monster, has died in Tokyo aged 87, according to local media on 18 March 2022. Image: Kazuhiro Nogi / AFP

Japanese actor Akira Takarada, who starred in the original 1954 Godzilla and several later films featuring the city-wrecking monster, has died in Tokyo aged 87.

Takarada, who appeared at the premiere of his latest film earlier this month, passed away in hospital having contracted pneumonia, Japanese media reported Friday.

“We are saddened to hear of the passing of Akira Takarada. May his memory continue to inspire the lives of many Godzilla fans,” said a tweet posted by the official account of the Godzilla franchise.

Takarada quickly rose to stardom after playing the lead role of a heroic ship’s captain in the first Godzilla, a movie that resonated in Japan as a walking, radiation-breathing analogy for nuclear disaster.

Just nine years earlier, the country had suffered the world’s first, and still only, atomic bomb attacks at the hands of the United States in the closing days of World War II.

AKIRA TAKARADA BECAME POPULAR IN ASIA DURING THE 60’S

Takarada also played a small role in The End of Summer, a 1961 film by cinematic master Yasujiro Ozu about a sake-brewing family in Kyoto.

The actor became popular in Asia around the same time, having appeared in joint Japan-Hong Kong productions with the actress Lucilla Yu Ming, and went on to star in many Japanese films and TV series.

Takarada was born in 1934 on the Korean peninsula and grew up in the Chinese province of Manchuria, then a Japanese colony. He was known for speaking some Mandarin.

Just after Japan’s defeat in 1945, he was shot in the stomach by a Soviet soldier and severely wounded.

“I still remember the sound of (a doctor) cutting my body while I was half-fainting” to remove the bullet without anaesthesia, he told news agency Jiji Press.

He later became an anti-war advocate and said he believed “the greatest sin committed by man is war”.

“We should no longer be losing lives in the name of war. There’s no reason or intelligence in war. We create a world of madness,” he told Jiji.

About Russia’s recent invasion of Ukraine, he told reporters:

“When we see the reality of a peace-loving country (Ukraine) being overrun, I think we need to make films that are a little more socially conscious.”