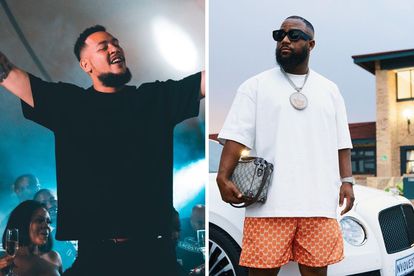 AKA has threatened legal action against rap rival Cassper Nyovest after the latter shared an edited pic mocking him.
Image via Twitter
@akaworldwide/@casspernyovest

AKA has threatened legal action against rap rival Cassper Nyovest after the latter shared an edited pic mocking him.
Image via Twitter
@akaworldwide/@casspernyovest

AKA and Cassper Nyovest’s feud has reached a new level of pettiness. Following Cassper’s posting on social media of a Photoshopped image of AKA – whom he named Billiato’s new “brand ambassador”, the latter has threatened legal action.

The Lemonade hitmaker – whose real name is Kiernan Forbes – issued a statement about the viral pic on Saturday 15 October.

ALSO READ: Trolling or a truce? Cass says AKA is ‘Billiato brand ambassador’

AKA THREATENS NEMESIS WITH LEGAL ACTION

It all began a day earlier when Cassper shared the tongue-in-cheek pic on his Instagram and Twitter pages.

He captioned the questionable snap: “Introducing the new Brand Ambassador of Billiato. Mix it with Lemonade”. And it was clear Cass was taking the Mickey out of his rap rival.

“I can also play the trolling game. Lol… let’s have some fun”, Cassper tweeted moments later.

After the Photoshopped pic blew up online – further cementing their feud as industry enemies, AKA responded with a statement condemning the action.

He shared in a statement: “On Friday 14 October, the purported owner and major shareholder of an alcohol product  made an announcement on multiple social media platforms accompanied by a manipulated image of Kiernan “AKA” Forbes, alleging that AKA is the alcohol product’s new ambassador.

“The announcement is ill-considered and has and still continues to violate AKA’s rights to have his likeness and image protected by law.

The statement also revealed that the rapper would possibly take the matter to court.

“AKA is exploring his legal options in this regard”, it continued.

CASSPER LAUGHS IT OFF

He added: “It’s all fun and games until I wanna play.”

When a tweep asked Cass about when fans would see a boxing match between the rivals, he replied: “That man is scared, he would rather have lawyers fight for him.

“He has the balls to swear at my parents on Twitter but won’t come to finish what he started. He must run forever if he wants to keep his ego intact”.

Cassper also share another Photoshopped pic – and this one speaks a thousand words!