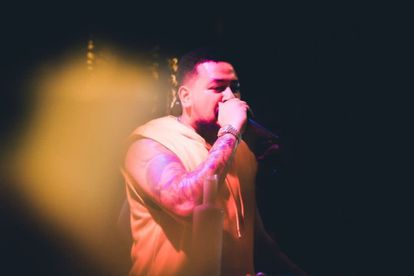 Crowd surfing may seem like a real rock star thing to do, but it comes with its own risks – just ask AKA! The rapper put himself in harm’s way after jumping into the crowd at a gig over the weekend in Malawi.

The star was a headline performer at a a social weekend event organised by the Malawi University of Business and Applied Science (MUBAS) in Blantyre.

And the group of rowdy students not only manhandled him – but stole the shoes off his feet!

AKA DOES IT AGAIN!

In a video which has gone viral on social media, AKA is seen crowd-surfing at a packed performance in Malawi.

By the look on his face, it’s clear the ride was rough as he was pushed around in the crowd.

At one point, AKA disappears as swarms of people gathered around him to get close to their idol. “Don’t take my shoes”, he can be heard saying into his microphone.

When AKA emerges again, he is seen pushing off overzealous fans who try to grope him. According to iHarare News, AKA’s pricey watch was also pulled off his arm during the scuffle.

The star is then pulled back onto the stage by security . The camera then pans to AKA walking with only one shoe on – which he takes off and throws back into the crowd.

Although AKA and rowdy crowds are nothing new, you’d think Mega would have learned from his crowd surfing disaster in 2020

During a performance in Rustenburg in March 2020, the Tears Run Dry hitmaker is seen jumping into the crowd – only to land on the floor, after fans did not catch him!

“TF was I thinking”, AKA later tweeted of the embarrassing incident.

ALSO READ: First anniversary of Nelli Tembe’s death: AKA and his mom speak out