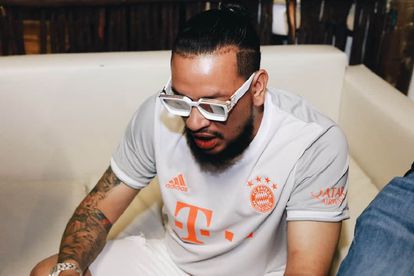 AKA, known for stirring up controversial conversations on Twitter, posed a “simple question” to his 4.8 million followers on 30 March and they were everything but helpful.

AKA IS LOOKING FOR A LOUIS VUITTON PUPPY COLLAR

Kiernan Jarryd Forbes, popularly known by his stage name AKA, told his followers that he just got a new puppy and asked where he could get a Louis Vuitton collar for his pooch. AKA is a lover of the “soft life” and it of course comes as no surprise that he would want to step out in style alongside the new addition to his family when they go walkies.

Many Tweeps thought it was a silly question for AKA to ask as Louis Vuitton is sold at Louis Vuitton stores. Of course, one has to ask oneself whether AKA did not just post the question in a bit of a show-off manner. Louis Vuitton for your puppy after all…

Other Tweeps were irritated that AKA was supporting international brands while asking them to support local artists, such as himself.

Another Tweep agreed with this, saying:

“Cc this are the same people who sang 90% local songs on radio stations..people who say we don’t support local hip hop… I think I have a say to tell him why doesn’t he just go a buy a leash Ya mzansi…!!,” wrote @MikeTshivhase.

“REST! let people do whatever they want with THEIR money!!!” wrote @mpholicious.

A Twitter user wrote “I hope your house helper is wearing one” to the confusion of many, including AKA, who later tweeted “people are weird”.

“The helper must have LV label clothes before…,” wrote @xzibitpower.

“Your financial situation is never a responsibility of your employer. It’s not your boss’s job to make you rich,” wrote @Ofessor_.

“Now that was a STUPID COMMENT Memo ever and it kinda insulting Expressionless face to women ♀ who works as “domestic worker(s) Confused face” next time ⌚ think Thinking face before you write your comment kunzi!!,” wrote @HelloUncleMazwi.

AKA was probably looking for real suggestions. However, the closest he got to do that was a hint at where to buy a knock-off in Cape Town.

AKA OFFICIALLY OFF THE MARKET

Last month, AKA put a ring on the finger of his young girlfriend Nelli Tembe and over the past weekend he apparently paid lobola for his bride-to-be.

He took to Instagram to post a picture of himself with four unidentified men, as well as pictures with Nelli Tembe. He captioned the post with a cow emoji, fuelling speculation of this symbolising his lobola payment.