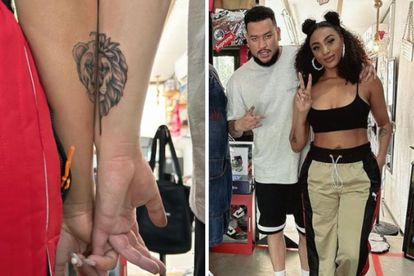 AKA and Nadia Nakai have shown off their matching tattoos.
Image via Instagram
@nadianakai

AKA and Nadia Nakai have shown off their matching tattoos.
Image via Instagram
@nadianakai

Behind every lion is a fierce lioness, and that is what fans believe a matching tattoo of rapper AKA and girlfriend Nadia Nakai reveals.

The couple – who have been dating for almost a year – shared pics of their matching inking this week.

AKA AND NADIA NAKAI GET MATCHING TATTOOS

Taking to their individual Instagram accounts, AKA and Nadia revealed that they had taken their relationship to the next level with a permanent display of affection.

The tattoos – done on Nadia’s right forearm and AKA’s left – depict the faces of a lion and a lioness.

But fans weren’t impressed by the couple’s tattoo commitment to each other.

Here’s what their followers had to say in the comments section:

Keed_timo_official: “This will end in tears”

Marilyn_maps: “Matching tatts are dangerous and you’ll should know that”

ALSO READ: ‘Love is in the air’: AKA on his relationship with Nadia Nakai

When one follower asked Nadia in an Instagram Q&A if she had concerns about getting a tattoo with a boyfriend, she responded: “Nope I’m a huge lover. I’m all in or nothing. Love loudly!”

Meanwhile, the latest tattoo joins a growing collection for both AKA and Nadia.

The Bragga star’s inkings include:

Meanwhile, AKA has tattoos of: