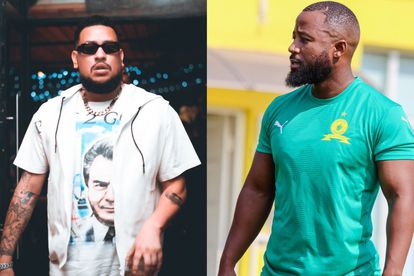 South African hip-hop fans were convinced that AKA and Cassper Nyovest buried the hatchet after they gave each other high fives during a celebrity soccer match in July. It seems all that glitters isn’t gold after AKA trolled the Billato businessman for his Put Your Hands Up lyrics on Tuesday 28 September…

ALSO READ: Cassper vs Priddy Ugly: Why the boxing match might not happen

AKA TROLLS ‘PUT YOUR HANDS UP’ LYRICS

Cassper Nyovest released his single Put Your Hands Up featuring Mousse T on 19 August. The song received mixed reviews from local hip-hop fans and has since scored more than 195 000 streams on YouTube.

Just over a month after the release, AKA took to Twitter to troll Cassper’s Put Your Hands Up lyrics in the track.

“Connect to the heart like the meduuuula … Whooo haaaaaaaa!!!!” wrote AKA.

LISTEN TO ‘PUT YOUR HANDS UP’ HERE

CASSPER RESPONDS TO AKA

Responding to AKA, Cassper Nyovest certainly did not hold back. Cassper was surprised that his nemesis was listening to his music and also trolled his new single Lemons (Lemonade).

“I see you’re listening to your favourite artist laatie. Glad to see you doing well and got a hit after 8 singles that missed. Including the mapiano song you tried with Semi Tee that failed: Ba re ke eng? Hurry up slowly? O tsogile nou wa spita o marete!!!” wrote Cassper.

Following the heated exchange on Twitter, some tweeps sided with AKA while others thought his tweet was below the belt.

“That last sentence was very necessary!!!” wrote another tweep.

“You’re always in your feelings.”