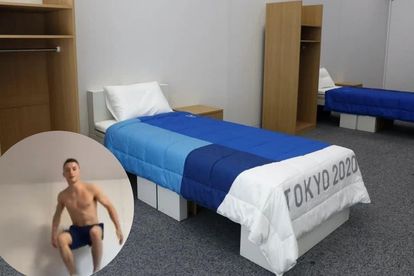 The amount of sex happening at the Olympics is apparently no joke, that’s why organisers of the Tokyo Olympic Village have gone to great lengths to minimise intimacy between athletes.

That’s why the Tokyo 2020 event is going to look very different to previous editions, with strict rules in place around mask-wearing, social distancing and the number of fans who may attend events. There will be no public viewing areas in the host city, and international spectators are not allowed.

What’s more, while there’s usually a tradition of handing out condoms to the athletes – this year will be a bit different. The Tokyo Olympics Organising Committee will reportedly continue with this tradition but told a Japanese outlet the condoms aren’t supposed to be used but rater brought back to an athlete’s home country for safe sex education.

Throughout the whole saga, organisers went a bit further by installing cardboard beds.

According to TMZ, the beds’ frames and modest mattresses are designed by a company called Airweave. They’re said to be somewhat intricate in their structure and configuring…able to be adjusted to an individual’s liking/contortion.

One Tweet suggests that the cardboard beds are able to withstand the weight of a single person to avoid intimate situations beyond sports, but according to Irish gymnast, Rhys Mcclenaghan this is not the case. In a video uploaded to Twitter, he demonstrated that jumping on the beds is actually doable.

In on the joke

US track and field star Paul Chelimo got in on the joke, explaining that it was clear to him the Olympic powers that be don’t want any intimate stuff going on because these beds, theoretically, only support the weight of one person.

“I see no problem for distance runners, even four of us can do,” he said, possibly implying that runners are light, therefore, a couple of them probably wouldn’t break the bed.

Sandra and Theo evicted from #BBTitans