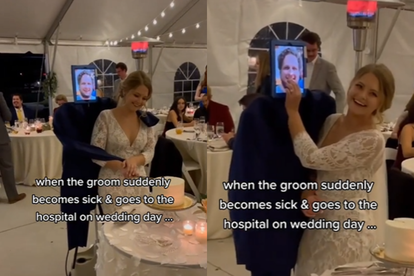 This bride has gone viral for replacing her sick husband with a mannequin at their wedding. Image via TikTok: @thevictorianyoungsville

This bride has gone viral for replacing her sick husband with a mannequin at their wedding. Image via TikTok: @thevictorianyoungsville

A woman has proved that nothing can stand in the way of a bride and her special day – not even her husband getting sick. In a clip that has since gone viral, the bride can be seen dancing with a mannequin. This is because her husband was hospitalised shortly after saying “I do.”

Bride continues celebrations with a mannequin!

In what can truly be considered a big “the show must go on moment,” the bride can be seen continuing her wedding despite her husband’s absence.

In a viral TikTok posted by @thevictorianyoungsville, a young bride is seen dancing with a mannequin. She cleverly placed an iPad with her husband’s face as the wallpaper as the mannequin’s head. She then goes on to cut the cake while the mannequin stands close by.

“He had severe food poisoning and is doing better now,” the bizarre clip was captioned.

In other parts of the clip, the bride, her makeshift husband, and some wedding guests can all be seen snapping some photos together.

Meanwhile, words across the screen explain how her husband was hospitalised on his wedding day after suffering severe food poisoning. Not wanting to ruin the day with her man’s sudden illness, the bride dressed a mannequin in a suit and continued the celebrations.

Netizens don’t know what to make of the madness

The clip garnered a whopping 54.9k likes and hundreds of comments from TikTokers. Many of them were unsure what to think about the fact that the bride continued to party despite her husband being hospitalised.

Others however said he wasn’t in a critical condition so of course, the party must go on.

“He has food poisoning. He wasn’t going to die. I would absolutely refuse to let my husband waste the party.”