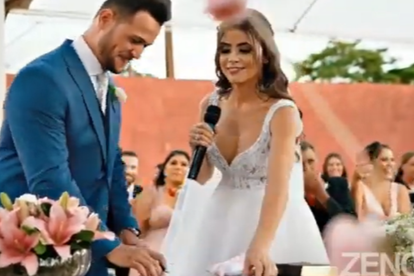 This bride is getting the big dish washing argument out of the way. Image via YouTube: @zenger

This bride is getting the big dish washing argument out of the way. Image via YouTube: @zenger

One bride has seemingly found a way to avoid many future arguments with her husband and it all started with a simple piece of paper and a pen. The Brazilian bride and her groom have gone viral online after the bride had her groom sign a contractual agreement that stated that he would wash the dishes every day.

Many social media users have had mixed reactions to the news with some saying it’s a pretty good idea while others disagreed.

Bride Jaqueline Miranda Bomfim has and her groom Lucas has gone viral after she made him sign a contract that states he will wash the dishes every day.

The wedding was going smoothly when all of a sudden, Jaqueline pulled out the paper and asked her groom to sign before she says I do.

Photos and videos of this went viral online as many social media users discussed her bright idea to make sure her husband helps her out with the chores which often go ignored by husbands across the world.

According to the Sao Paulo bride who later spoke to Brazilian publication, Zenger, the idea came to her as a joke and so she asked Lucas if he would wash the dishes every day.

Later at the wedding, she pulled out the contract – much to his surprise.

“It was a relaxing moment for my vows, I made my guests smile at that moment, and my wedding video was really cool with their joy.”

“I didn’t ask for anything more than the dishes, but still he does more! In fact, he teaches me a lot, because I got married without even knowing how to cook, and Lucas already lived alone and knew how to manage a lot.”

Jaqueline admits that the prank resulted in a lot of criticism online but neither she nor Lucas can be bothered.

“We received a lot of criticism, but I confess I don’t care about any of it.

“They think that the woman has to take care of all the domestic chores, and it’s not like that, today the world has changed, and we even share the bills.”