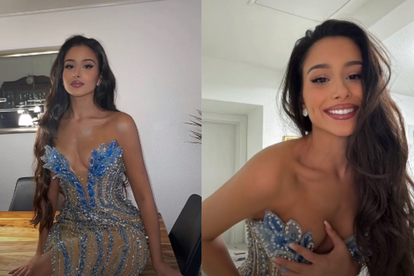 This bridesmaid was disinvited by the bride because she’s too beautiful. Images via TikTok: @alenayildiz

This bridesmaid was disinvited by the bride because she’s too beautiful. Images via TikTok: @alenayildiz

A young woman has been left in utter shock after her best friend disinvited her to the wedding. In a crazy online post, the beautiful young woman shared snaps of herself in the stunning dress that made the bridezilla change her mind. The post went viral as people discussed bizarre brides and their extreme measures in pursuit of a perfect ceremony.

Bride-to-be disinvited bridesmaid to wedding for a bizarre reason

A quick scroll through the internet will reveal that the world is absolutely filled with brides and brides-to-be who are absolutely bizarre. Many of them do the craziest things in order to make sure that their day is absolutely perfect.

A bridesmaid was disinvited from her friend’s wedding because she apparently looked a lot better than the bride in her dress. According to the bizarre post, the bride told her she couldn’t come anymore even though she chose the dress.

“My close friend uninvited me to her wedding because she thought I looked too good in the dress she chose for me,” immodestly adding, “Still took some fire pics in it though,” wrote Alena Yildiz from Germany

She also added that all the other bridesmaids got to wear their extravagant dresses.

“All of our other friends wore extravagant dresses as well, but she only had a problem with me,” she said.

She also went on to say that the bride was “insecure” and “attention-grabbing”.

This is something that many social media users agreed with. A lot of them slammed the bride for being what they called selfish and inconsiderate of her friend’s feelings.

“SHE’S the one who chose the dress so she could’ve just asked you to change your dress instead of rudely uninviting you.”

ALSO READ: Bride scams maid of honour out of R580k after lying about inheritance