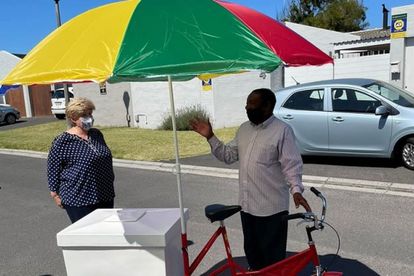 Residents in one of the Northern suburbs of Cape Town, Edgemead, have come together to support an elderly ice cream vendor in their community.

It is reported that when Lebesana’s bicycle stopped working, he had to walk around the neighbourhood carrying a large cooler box to sell his frozen treats.

It is said that the community stepped in as Lebesana’s bell has become a familiar sound over the years. After Schultz saw that he was walking with a cooler box, she reached out to the community, saying that:

“He was carrying a cooler box on one of Cape Town’s very hot summer days and it broke my heart,” Schultz said. “I thought I’ve got to do something to try and help him.”

To her surprise, the community rallied together to help Lebesana.

“I put it on the local Edgemead group and the response I got was definitely not what I expected… it absolutely blew my mind.”

Residents managed to raise a substantial amount of cash for Lebesana that will reportedly help him with his ice cream supplies for the next several months while South Africans are enjoying summer time.

Schultz says they later handed over a monetary gift, bicycle, cellphone and workwear to help Lebesana get back on the road.

Lebesana told Maytham that he is grateful.

“All I wish is that God can bless all the people that helped me,” he said.

You can listen to the full interview on CapeTalk over here.