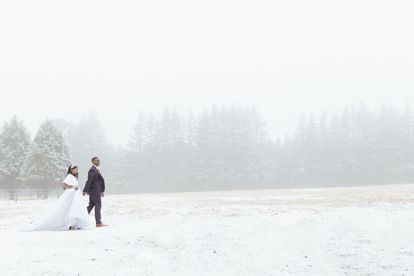 Simone Aricksamy had a magical white wedding as it began to snow while she walked down the aisle to officially tie the knot to Jarryd Aricksamy on Saturday 28 August at Providence Country Weddings on Nottingham Road in KwaZulu-Natal.

From heavy rains to a beautiful snowy white wedding, Simone and Jarryd Aricksamy were blessed with a wedding venue to remember.

Simone Aricksamy explained that she tried to make the best of her wedding day despite the heavy rains and cold front that took place over the weekend in KwaZulu-Natal. With the temperature reaching three degrees celsius in the usually sunny province, the newlyweds had no idea that the rain would turn to snow.

“It had rained throughout the night and was bucketing in the morning when we got up,” said Simone Aricksamy to IOL.

However, her mood was lightened when she got to experience a magical moment. As she walked down the aisle, it began to snow.

“And then it snowed. God turned the weather around for us and made a provision for us to have a fairytale white wedding, which is more than we expected,” she continued.

PHOTOS OF THE ‘WHITE WEDDING’

The couple’s wedding pictures were shot by Stuart Dods.

The wedding pictures went viral on Facebook with many commenting on how lucky the couple were to have such a picturesque fairytale wedding.

The wedding photographer Stuart Dods explained that it was quite challenging shooting while the snow was pelting down but the bride was such a sport.

“I had to motivate and keep positive to maximise this once in a lifetime opportunity that no other bride I’ve shot in 13 years has ever had,” said Dods to The South African.

“She was such a sport, the temperature was three degrees and the snow was pelting down. So, it was quite frenetic trying to see your shots on a whim while guiding the couple and still managing your technical settings on the camera,” he continued.