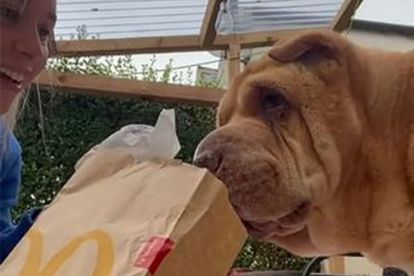 Is that McDonalds McMuffin all for me? Baxter the Shar Pei spend his last day showered with love and a last meal of note. Image: TikTok @elliebuckler

Is that McDonalds McMuffin all for me? Baxter the Shar Pei spend his last day showered with love and a last meal of note. Image: TikTok @elliebuckler

Ellie Buckler from Blackpool, in the United Kingdom, wanted to give her beloved Shar Pei, Baxter, a divine last meal before he crosses over the rainbow bridge. Her clip on TikTok showing her four-legged friend’s last day in her company, has been racking up thousands of views since it was posted in July.

In the emotional clip with Stuff We Did from Up playing, Buckler is seen cuddling the Shar Pei.

Baxter’s last meal a taste of heaven on Earth

The 21-year-old Buckler ditched the pellets and plain ol’ dog food to give Baxter a taste of heaven on Earth on his last day.

So what was on the menu?

The Daily Mail reports Buckler treated Baxter to a McDonald’s breakfast and his very first chocolate. He washed all this down with a comforting cup of tea! How very British of him!

‘No dog should go to heaven without tasting chocolate

Taking to social media, the American vet shared a picture of her “Goodbye Kisses” jar with the following explanation:

“This jar is reserved for our euthanasia appointments…because no dog should go to Heaven without tasting chocolate. ❤️❤️❤️.”

The 12-year-old pooch had been battling numerous health issues, including struggling to breathe and decreased mobility. Buckler was forced to make the heartbreaking decision that putting him to sleep, would be the most humane option.

“As heartbreaking as it was, we had to do what was right. It wouldn’t have been fair to allow him to carry on the way he was,” Baxter’s loving owner told PEOPLE.

Buckler said she had known Baxter since birth. Her family cared for Baxter’s mom, Rolo, before she passed away in 2018.

“We literally had him since the day he took his first breath, so we had a very strong bond,” the devoted dog owner told PEOPLE.

ALSO READ: Only mad dogs and ‘Gautengers’ go out in the Mozambican midday sun

Baxter off over the rainbow bridge

On the night before Baxter’s last day, Buckler’s stepdad slept outside with him on the deck so the dog wasn’t alone. The next morning, Baxter awoke to the smell of a McDonald’s McMuffin.

“I’ve let him have a tiny bit of mine in the past, and he would always want more, but I wouldn’t let him,” Buckler told PEOPLE.

Their last day together also included a walk to go and buy some ham and an overload of tummy rubs and cuddles.

Around 6pm, the family took Baxter to the vet.

“I cuddled him while having the injection, and he passed in my arms,” Buckler said, “It was very peaceful, and it was a relief to see him out of pain.”

Buckler added a video of the sunset when she came home, featuring a rainbow.

“Off over the rainbow bridge,” she wrote. “Running in the big fields in the sky ❤️ love you forever baby boy 🌈 12 years wasn’t long enough.”