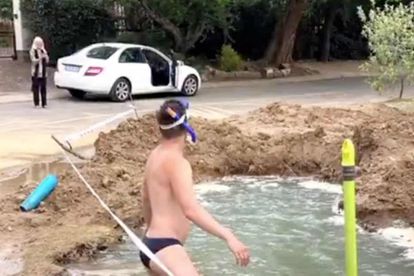 While inflatable pools became more and more in demand last year due to President Cyril Ramaphosa’s “beach ban”, a Fourways resident went viral for taking his vacation in his own hands by taking a swim in a sinkhole/pothole outside of his house.

While COVID-19 infections are on the rise in South Africa, many citizens are hoping for a better festive season than last year which saw an alcohol ban and beach ban in place.

Luckily, in 2020, the resident, only known as the “Sinkhole Teacher” provided some relief with his pink flamingo and his tub of HTH.

The idea behind a vacation in a sinkhole

“The idea is really to make light and fun of a dire situation,” Good Things Guy reported at the time, “bringing the spotlight onto Joburg’s failing infrastructure that is as old as 40 years and hasn’t been maintained properly in over 20 years old.”

The hilarious video that was shared on Twitter was inspired by the Netflix original documentary, My Octopus Teacher, which chronicles the year-long relationship between a man and an octopus.

At the time, it was further reported that the Fourways “Sinkhole Teacher” pledged to take a photo of a different water burst each day to put the spotlight on Joburg’s decaying water system, decaying municipalities and infrastructure due to mismanagement over the years, greed and corruption in the city.

His view is that in 20 years, the poor remain poor and will have it harder now with all the infrastructure that has been not maintained over the years.

What happened to SA’s sinkhole teacher?

However, the last we heard of SA’s “Sinkhole Teacher” was in February 2021 when the “teacher” enjoyed some drinks at Joburg’s newest and coolest watering hole.