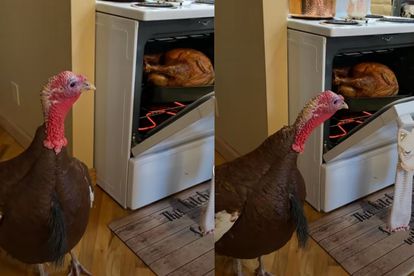 A TikTok user caused an uproar after posting a video of a live turkey looking at another turkey being roasted in the oven for Thanksgiving on 25 November.

A TikToker who goes by @our10acres shared a video of a live turkey watching another turkey bake in the oven on Thanksgiving. The video of the turkey went viral, racking up 45 million views and 5.9 million likes.

The male turkey is named Tom and he is curious to see what is in the oven.

TIKTOKERS: ‘YOU JUST GOING TO COOK HIS HOMIE IN FRONT OF HIM’

The 11 second video caused an uproar on the platform. Many people in the comments section were outraged.

“You just (going) cook his homie in front of him,” wrote Dutch and Lola.

“The bird was too stunned to speak,” wrote Jaimess Auvil.

“Imagine cooking a human in front of a human and saying it’s okay you don’t know him,” wrote @Tay Smith.

“That is so wrong in so many ways,” wrote Maclovia Valles.

The creator of the video cleared the air on the video saying that the turkey was not traumatised. He was just mad he wasn’t allowed to eat it.

“Just adding, Big Red was not traumatised. He was mad I didn’t let him eat it,” wrote @our10acres.

Others had a light hearted take on the video.

“Use the Cardi B ‘what is that’ sound,” wrote Mandy.