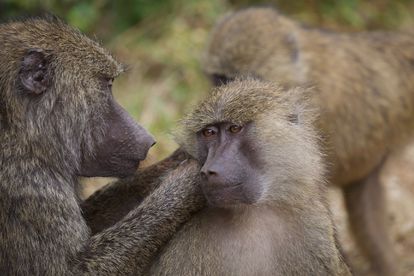 An animal rights group has a R8 000 reward for information that will lead to the arrest of the person who killed a baboon in Cape Town. Image via Unsplash

An animal rights group has a R8 000 reward for information that will lead to the arrest of the person who killed a baboon in Cape Town. Image via Unsplash

An animal rights organisation called Beauty Without Cruelty (BWC) is calling on anyone who may have information on the person who shot and killed an adult female chacma baboon nine days ago in Constantia, Cape Town, News24 reports.

According to BWC national chairperson Toni Brockhaven, the shooting is “dispicable,” adding that firing a weapon in a residention area is illegal.

“Over and above the lack of ethics, firing a weapon in a residential area is illegal.

Brockhaven also blamed the City of Cape Town for deciding to remove rangers who were responsible for monitoring baboons in Constantia in April.

“This incident must be laid at the door of the City of Cape Town which removed the rangers to depend on volunteers to monitor and assist the baboons over a treacherous road, resulting in ever more impatient residents to harm the baboons,” Brockhaven said.

Also blaming the City is Lorraine Holloway from Baboons of the South. She told IOL that the shooting was yet another sad reflection of the City’s lack of decision-making regarding the baboon management within the current contract, ending in June 2023.

“The bitter truth of it is that the authorities have never jointly ‘grasped the nettle’ and come up with a plan that meets conservation and community imperatives. Everything that has been done has been peripheral rather than problem-solving.

HOW THE BABOON WAS KILLED

According to two members of Tokai Baboon Action Group, Gerry Higgs and Bonita Franklin, a troop entered a property on Monterey Drive. Shortly after, they heard glass breaking and what sounded like the discharge of a gun which scared the baboons off. This was when they saw an injured female baboon in pain.

The baboon was assisted by the Cape of Good Hope Society for the Prevention of Cruelty to Animals (SPCA) and a vet who transported the injured animal to their facility.

Although it isn’t clear yet if the shooter used a pallet gun or a normal .22, Jaco Pieterse of the SPCA said the baboon was a pregnant adult female.

A man who said he worked at the Monterey property was seen carrying a catapult and admitted shooting at the baboons, but “only to scare them away”.

According to Pieterse, the person responsible could get a R40 000 fine and or a 12-month imprisonment sentence under the Animal Protection Act.