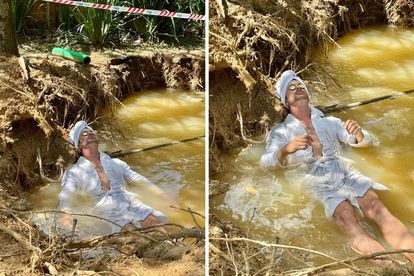 Who would ever forget Fourways’ very own ‘Sinkhole Teacher’ swimming in his very own ‘pool’ in the middle of Johannesburg? At the time, the idea was to make light and fun of a dire situation in South Africa. And it looks like the Sinkhole Teacher – and many others – did something right as the Pothole Patrol has repaired more than 100 000 potholes since its launch in May 2021.

Forget Paw Patrol, the Pothole Patrol is gearing up

The executive mayor of Johannesburg, Mpho Phalatse announced the news earlier in May, saying that they must get the basics right, and this includes repairing and maintaining aging infrastructure.

The Pothole Patrol – a partnership between the City of Johannesburg (CoJ), Discovery Insure, and Dialdirect Insurance – stated that even though unprecedented wet weather exacerbated the already dire pothole situation in Johannesburg, they’ve successfully managed to exceed their mandated repair target by 25%, month-on-month.

According to Good Things Guy, the Johannesburg Roads Agency estimated that the city had around 90 000 potholes in need of repair, but this number seems to be a massive under-estimation.

In response to the issue of potholes in Johannesburg, the Pothole Patrol launched an app in October last year to help road users report potholes and accelerate the programme’s output. This also lead to a 26% reduction in pothole-related claims in Johannesburg, compared to an increase of 45% across the rest of Gauteng.

A number of reports in Roodepoort

The Pothole Patrol said that Roodepoort received the most pothole reports. Other areas with a number of complaints include:

Johannesburg Roads Agency (JRA) CEO Siya Nodu indicated that Roodepoort was one of the oldest suburbs, and as a result, most roads had passed their design lifespan.

How to report a pothole in Johannesburg

Road users are encouraged to log calls with the City of Johannesburg’s call centre at 0860 562 874 and choose option 5 for the JRA. Additionally, they can download the Pothole Patrol apps on the Apple App and Google Play stores.