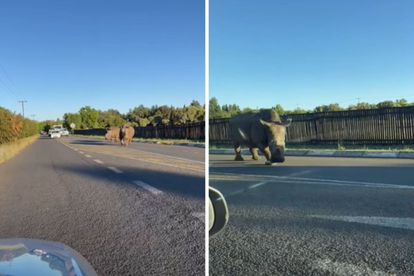 South Africans tend to laugh when foreigners think wild animals roam the streets, but every once in a while this actually deems to be true. In 2020, citizens were shocked to find a hippo casually strolling through a petrol station, and now, residents in Bloemfontein were taken by surprise when they found two rhinos roaming the streets in the early morning hours of 9 November 2021.

Rhinos roam the streets of Bloemfontein

According to Jacaranda and OFM News who shared the YouTube video, residents from an upper-class residential estate in Groenvlei, Bloemfontein, were caught by surprise on Tuesday morning when the two rhinos were spotted casually making their way towards a local shopping complex.

It is reported that the rhinos each weigh 2.4 tonnes and belong to a well-known local wildlife estate.

Due to concerns and fears around rhino poaching, the owner asked not to have his premises mentioned in the media.

A close friend alerted the owner of the rhinos’ escape, prompting him and his team to scramble out of their beds in search for the two rhinos named Shaka and Shakira.

“It’s understood the pair escaped from the wildlife estate after the gate was left open during ongoing construction,” the publication reports. “The duo had managed to get close to a local shopping complex in the course of their 20 minute excursion before they were promptly apprehended.”

The two rhinos were not darted and were merely guided back to the estate by employees whose voices they are reportedly familiar with.

Despite one or two encounters between the calm rhinos and motorists, no major incidents or damages were reported. Luckily, the two rhinos are now safely back at home under 24-hour protection, alongside 40 other friends in the estate.

You can watch the video of Shaka and Shakira down here: