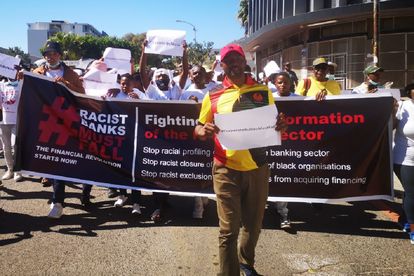 The “Racist Banks Must Fall” movement gained momentum in the streets of Cape Town and on social media this week. This follows Bank of America coming under fire on Wednesday 9 March for an incident which saw Black Panther and Creed director Ryan Coogler getting briefly arrested after a teller mistook him for a bank robber.

On Thursday 10 March, a protest march of more than 200 people headed for the streets of the Mother City. The protesters marched to Cape Town’s equality court to lay a complaint against South African banks which they believe to be “racist”.

Eight South African banks, including Nedbank, Absa and FNB, have been accused of racial profiling by Investment Holdings. This after the group’s accounts were frozen by these banks between 2020 and 2022 after allegations of impropriety at the Public Investment Corporation (PIC) surfaced during a commission of inquiry.

As reported by Moneyweb, in late 2020, Absa sent out letters informing Sekunjalo-related entities that their services would be terminated in 60 days. Other major banks, including Nedbank, Investec and Standard Bank, followed suit by closing accounts or placing the accounts under review.

According to SowetanLIVE, former PIC CEO Dan Matjila, Sekunjalo Group’s Iqbal Survé and others are among those implicated.

“The continuous racial profiling that seeks to undermine nonracialism in this country. The closure of the Sekunjalo bank account is one — but one — of many cases and it is not necessarily the owners who will be hit hard but families who are going to suffer,” South African National Civic Organisation (Sanco) provincial chairperson Bongikhaya Qhama was quoted as saying by the publication.

Hundreds of protesters marched to the Equality Court carrying banners and placards that read:

Also present at the protest was the ANC Youth League (ANCYL). The party told SowetanLIVE that the march also speaks to the resolutions it adopted about wanting economic freedom in this lifetime.

“It is very important for us as the ANC Youth League to be part of this march because it speaks to our struggle and the resolutions we adopted when we said that we want economic freedom in our lifetime,” said ANCYL national spokesperson Sizophila Mkhize.

Take a look at a short clip of the protest posted on Twitter:

The protest in Cape Town comes two months after Black Panther director Ryan Coogler was arrested after being mistaken for a bank robber.

The incident took place on 7 January when the award-winning director went to Bank of America wearing a hat, sunglasses and a face mask to withdraw $12 000 (about R181 100) in cash. Upon handing the bank teller a note that read: “Please do the money count somewhere else. I’d like to be discreet”.

This was misinterpreted as an attempted robbery and informed the manager who called the police.

Though the issue was later resolved according to Coogler, social media slammed Bank of America, classifying them as one of the “racist banks” in the United States.