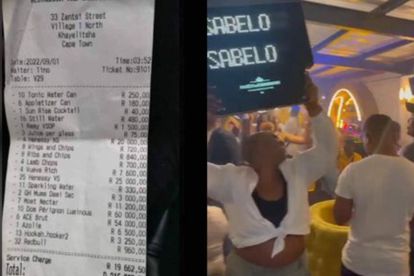 A lifestyle restaurant/bar in Cape Town had one of its most profitable nights on Thursday, 1 September 2022 (Spring Day), when a man known as Sabelo bought brandy for every table and forked out more than R200k on alcohol.

ALSO READ:WOW! Waiter gets a MASSIVE tip of R94,486 at Mossel Bay restaurant

The receipt shows that the man known by Twitter users as Sabelo bought 29 bottles of brandy for every table at the bar and spent more than R200k on mostly alcohol and food at The Milk Restaurant and Champagne Bar in Cape Town on Spring Day.

A Tweep with the handle @uYesuKrestu managed to share the ridiculous bill on Twitter and fellow users of the app can’t imagine how that much money is spent in just several hours.

So how does a bill at a lifestyle restaurant and bar even get to R216k? Well, let’s break down what was supposedly ordered.

The slip also shows that the lucky waiter who served the patron and his guests got nearly R 20 000 tip.

REACTIONS TO THE BILL

According to the Twitter user who shared the picture of the receipt, the club is in the same area where there was a mall heist last week. Others questioned the authenticity of the bill, specifically asking how the establishment could even afford to have so many bottles of expensive champagne in stock.

“Somebody check cash heist activities in the last month. No person with a 9 to 5 do this.”

“They create these fake bills for content. You can ring anything and then void the whole bill afterward.”

“Dude… This ain’t a joke. Sunday I was there. I saw that table of him buying Ace’s, XO’s, etc. Wednesday I saw on The Milk IG status. Dude doing the same and lots of Hennessey’s to each table.”

“Those 3 glasses of juice have no moral standing in this conversation. Abahoxe.”