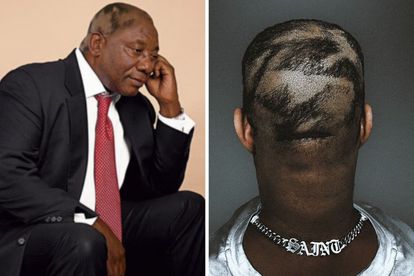 After Kanye West (now Ye) shared his new haircut to his 8.9 million followers on Instagram, photoshop experts on social media seemingly took it to the next level.

Did Kanye give North the clippers?

Kanye shared the photo of his hair on Instagram while facing away from the camera to show off the distinctive “do”, donning a silver chain with his son Saint’s name spelt out in Gothic lettering.

The internet immediately searched the shaved style for hidden meaning – with one even tracing Kanye’s new name on his head – or pointed out that the rapper might just be starting another trend.

“Everybody going to get this trim now,” one predicted on Instagram, while another added, “Watch people start cutting their hair like this now…”

But, while most of his fans were left puzzled and left searching for any hidden meaning, IOL reports that some of his fans seem to like the haircut. But it wasn’t long after when Twitter folks saw it as an opportunity to poke fun at people.

They even went as far as photoshopping the image with the American singer getting his haircut from Stevie Wonder:

Another Twitter user, @RealMrumaDrive, who is reported to be well known for his photoshop skills, then photoshopped President Cyril Ramaphosa into Ye’s haircut:

Of course, the internet is loving Kanye – and now Ramaphosa’s – haircut:

Others noticed that while Kanye’s hair is starting a trend, he is also walking around in Crocs boots and creepy face masks: