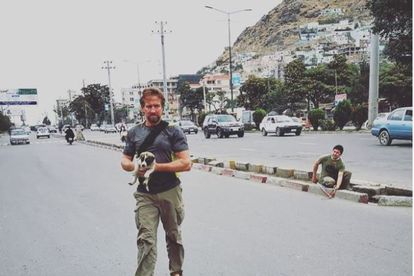 Paul ‘Pen’ Farthing in the streets of Kabul in Afghanistan. Image via Instagram @penfarthing

Paul ‘Pen’ Farthing in the streets of Kabul in Afghanistan. Image via Instagram @penfarthing

Ex-Royal Marine Commando Paul “Pen” Farthing is the driving force behind Operation Ark, a fundraiser to assist in covering the costs of transporting the staff and animals of his Nowzad animal shelter from Afghanistan to the United Kingdom.

WHO IS PEN FARTHING?

Aside from being an ex-Royal Marine Commando, he is also the founder of animal rescue shelter Nowzad which he set up in Kabul, the capital of Afghanistan, in 2006 after serving in the military there.

While on duty in 2006, Farthing had to break up a fight between two stray dogs in the town of Nawzad. One of the dogs then followed Farthing around for the next six months and he named him Nowzad.

In his Sunday Times bestseller, One Dog at a Time, Farthing writes:

“Nowzad was a gentle giant when it came to taking treats. He never, ever snatched. To me it was just further evidence that, deep inside, there was a great dog struggling to find his way out.”

Farthing also penned No Place Like Home: A New Beginning with the Dogs of Afghanistan and Wylie.

The beginnings of Nowzad: One dog at a time

Following his deployment, Farthing started the Afghan animal welfare charity. Initially, Nowzad was created to reunite service men and women with the dogs and cats that befriended them while out on the streets of Afghanistan.

Since the takeover of Afghanistan by the Taliban, which is known as Deobandi Islamist religious-political movement and military organisation regarded as terrorists, Pen Farthing, his wife, Kaisa Helene, their staff and about 200 animals needed to find their way to the UK. This is how Operation Ark came along, as they needed funding to be flown to safety.

Celebrity activists Ricky Gervais and Peter Egan pleaded with the British government and the public to support Operation Ark.

HAS PEN FARTHING MADE IT OUT OF AFGHANISTAN?

Pen Farthing attempted to make it out of Kabul airport when they were caught up in the airport bomb blast on Thursday 26 August.

On their way to board a chartered plane, a gunman opened fire in an incident which saw the driver “narrowly” avoiding being shot in the head and was forced to turn back, according to Daily Mail.

Farthing tweeted that he had been turned away at Kabul airport at the very moment that the whole team and dogs and cats were safely 300m inside the airport perimeter.

Defence Secretary Ben Wallace complained that some of the Operation Ark supporters had “taken up too much time of my senior commanders dealing with this issue when they should be focused on dealing with the humanitarian crisis,” according to BBC.

He also said that his advisors and officials had received abusive calls which were “based mainly on falsehoods, that somebody, somewhere had blocked a flight – no-one blocked a flight,” he continued.

“Fundamentally, as we have seen on the media, there are desperate, desperate people, and I was not prepared to push those people out of the way for that.When people’s time is right, they were called forward, and that’s the right thing to do,” he went on to say.

“But I hope he comes back, he was advised to come back, his wife came back last Friday, so I hope he does as well,” he added.

On Friday 27 August, the Ministry of Defense confirmed that Farthing and his pets were assisted by the UK armed forces at the Kabul airport.

There has been no reports that Pen Farthing has successfully evacuated Afghanistan as yet.