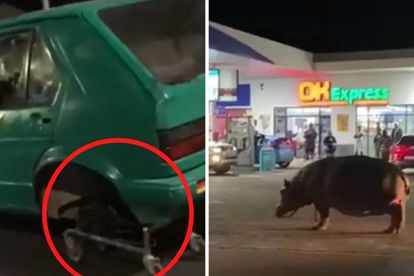 After a video of a South African driver went viral last week for using a part of a supermarket trolley instead of a spare wheel to get around, numerous comments suggested that something of that calibre “only happens in South Africa”.

Only in South Africa: Using a supermarket trolley as spare wheel

Believe it or not…a video of a VW Golf went viral on Twitter after it was seen cruising around with a supermarket trolley instead of a spare wheel.

A passenger in the car driving behind the Golf captured the video and can be heard laughing in encouragement as the reckless driver of the Golf speeds ahead with only three roadworthy wheels.

One of the missing back wheels had been replaced with four trolley wheels. “Wow this is so cool, my broer!” the person can be heard saying.

The registration plate, CEY, suggests the vehicle could be from the Strand and Gordon’s Bay areas of Cape Town.

Another video that has been dubbed “proudly South African” sees a South African taxi taking off on its very own special route…not on the usual road.

South Africans loved the footage which shows Cape Town’s Table Mountain and Lion’s Head in the background, saying that there is no place like home.

“The fact the I knew it was South African without looking at the caption,” said one TikTok user. “And you know they turned a 40-minute trip into six minutes,” said another.

Others said that the whole incident should not be referred to as “crazy”, as the driver was simply “efficient”.

Metro cop clings to bonnet of moving car in Krugersdorp

In 2019, a video of a traffic officer pinned to the bonnet of a speeding car alerted the authorities in Gauteng, after the clip went viral on social media.

It is 17 seconds of pure, unfiltered madness.

A concerned driver begins filming to the right-hand side of his car. After a few seconds, a grey Audi pulls into focus – with a green-vested traffic official clinging on to the front of the rogue motorist’s vehicle. Travelling at considerable speeds, the committed cop refused to let go.

At the end of the clip, we see the driver grant mercy to the dogged officer, by pulling up at the side of the road. A taxi also pulls up next to the offending vehicle, to investigate what is going on.

Meanwhile, in 2020, footage of a hippo casually walking into a garage in the northern KwaZulu-Natal town of St Lucia went viral. It was reported that St Lucia is part of the iSimangaliso Wetland Park, which is home to between 800 and 1 000 hippos.

Other instances might need a little bit more context…but one thing is for sure: It can only happen in South Africa!