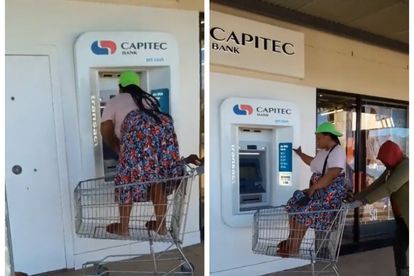 From somersaulting to the ATM to arriving in a trolley to withdraw her ‘millions’, a woman’s bizarre antics has Mzansi in stitches. Image via Twitter @apexworld_

From somersaulting to the ATM to arriving in a trolley to withdraw her ‘millions’, a woman’s bizarre antics has Mzansi in stitches. Image via Twitter @apexworld_

The country may be going through tough financial times with the increase in petrol and food prices, as well as the ongoing energy crisis, but as the great philosopher Demi Demi once said “tough times never last”.

One person who is living her best life despite any challenges Mzansi is facing is a woman who’s found her own unique way of arriving at the automated teller machine (ATM) to withdraw some cash.

WOMAN ARRIVES AT THE ATM IN A TROLLEY

In a clip that was shared on TikTok by @heathermenyani, a woman is seen arriving at a Capitec ATM in a trolley. The video, which was posted on the social media app on Tuesday 26 July, has amassed over 90 000 views. It has also reached Twitter, where tweeps were left in stitches as they could not believe the creativity.

This is not the first time that Heather Menyani has taken a trip to the ATM in a bizarre and funny manner. In another video she posted on Sunday 16 July she somersaulted right before getting up and using the machine.

TWEEPS ARE LOVING HER GRAND ENTRANCE

“This is how I expect to be treated when I send you money for your haircut,” one tweep wrote.

“Leave her alone she’s fulfilling her childhood dream,” another tweeted.

“Going to pull up at Jack in the box drive way like this since they have decided to remove dine in option,” someone else wrote.