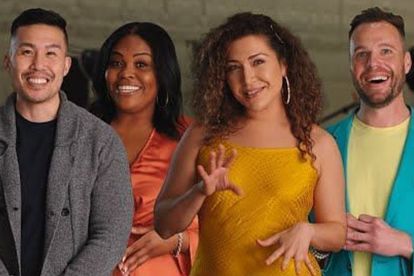 Based on personality traits rather than physical ones, the concept of the show is about couples forming an emotional connection, leading to marriage.

After meeting and forming relationships – all whilst never physically seeing each other – contestants pair off and get engaged. The couples then meet in person and begin their month-long journey to their wedding day.

The show – featured in the Top 10 Netflix shows in Mzansi – is hosted by real-life celebrity couple Nick and Vanessa Lachey.

ALSO READ: ‘Inventing Anna’ is a Netflix masterpiece about the life of a REAL scammer!

When it comes to reality dating shows, we’re used to seeing slim and cosmetically-enhanced bodies on our television screens.

Which is why Love Is Blind came as a breath of fresh air to many viewers. With several plus-size contestants and a concept not based on physical appearances, the show was tipped to be an riveting reality TV series.

Until a few episodes in, when none of the plus-size contestants were given airtime or the opportunity to make meaningful matches.

Viewers of the show took to Twitter to vent their frustrations…

“#LoveIsBlind really strolled out two plus size women in the premiere making us think we were going to have diversity. Then we never saw them again”

“Love Is Blind and not superficial so we’re going to include two plus size women for 5 minutes, no plus size men, and then give a ton of airtime to thin people talking about their body image!”

“#LoveIsBlind invited plus size women onto the show. Instead of seeing them we are seeing women who lost weight and are skinny but still struggling with body image. This feels…not right”

“What happened to the other girls from the intro? Netflix is so f**king transparent with this crap. Not even hiding the fake diversity”

“So Netflix meant to tell me that none of the plus size women or dark skin women on #LoveIsBlind were unable to find love? So their voice and/or personality are so ‘ugly’ that they can’t find love behind a wall? They have the nerve to call that a social experiment”

The first five episodes of Love Is Blind were released on 11 February 2022. The next four episodes will debut 18 February, and the final episode will air on 25 February.