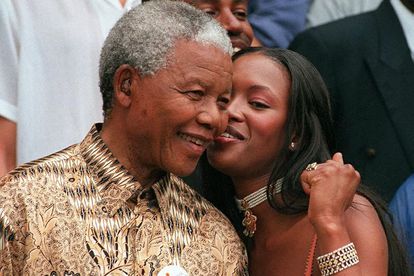 Nelson Mandela smiles as British supermodel Naomi Campbell whispers in his ear at Genadendal, his Cape Town home on 13 Frebruary 1998. Campbell has brought the last haute couture collection designed by Gianni Versace and his sister Donatella to Cape Town. All proceeds of the fashion show, which as modelled by several international models, went to the Nelson Mandela Children’s Fund.

Nelson Mandela smiles as British supermodel Naomi Campbell whispers in his ear at Genadendal, his Cape Town home on 13 Frebruary 1998. Campbell has brought the last haute couture collection designed by Gianni Versace and his sister Donatella to Cape Town. All proceeds of the fashion show, which as modelled by several international models, went to the Nelson Mandela Children’s Fund.

British model Naomi Campbell has been trending on South African Twitter since Friday evening. It started when the world-famous model posted a lengthy open letter to former President Jacob Zuma regarding everything that has transpired in the country following his detainment.

Naomi Campbell pours her heart out

World-renowned model Naomi Campbell has broken her silence about the state of South Africa following nationwide protests and looting sprees. Taking to her Instagram page on Friday 30 July 2021, the UK-born model addressed a letter to former president Jacob Zuma whose arrest and detainment resulted in the unrest that saw many lives lost and businesses looted.

“I have watched how over the last few years you have protested your innocence at the allegations tabled against you of corruption and allowing mass State Capture. I have seen you got out of your way to avoid having to deal with these matters in court and avoid a commission set up to investigate State Capture.”

She also goes on to ask Zuma to be the leader he says he is and take responsibility for everything that has transpired in the country over the last few weeks while also taking the opportunity to stand before the commission and contest the allegations that were leveled against him.

“If you still consider yourself a leader then please act and take responsibility like one. Agree to finish your appearance in front of the State Capture commission and equally you will have your days in court to contest the corruption charges alleged against you.”

In her letter, Campbell who has always been fond of Nelson Mandela writes how Zuma and his continuous efforts to evade facing questions around allegations of fraud and corruption, has destroyed the legacy of democracy which Nelson Mandela fought hard to bring about.

She also addresses how the country triumphed against apartheid and other societal ills and is now no longer the same defiant place that she remembers it to be:

“This isn’t the South Africa I remember and that millions of South African’s fought for. South Africa that overcame Apartheid, showed the world that change was possible.”

“Each day you defy the courts and stoke division you take a step backward from Madiba’s vision for South Africa to prosper and for their not only be equitable political justice but also economic justice,” she wrote.

While many people commended Miss Campbell for speaking out and recognising what was happening in the country, a lot of them were soon dragging her online. A number of tweets made using her name have now resulted in her trending on Twitter as many people share their thoughts.

“Gone are the days where South Africans will be manipulated by just two words, Nelson & Mandela. Instead, the resentment for that name grows daily by the masses that continue to suffer even in a ‘Constitutional democracy’. Naomi Campbell fumbled with this one.”

“How much did they pay Naomi Campbell? Ramaphosa is going all out! Damn!”

Campbell has always had a spot in her heart for South Africa’s first black president, Nelson Mandela. When the model is not speaking highly of him and the role he played in the country’s freedom, she was sending him red roses every year on his birthday. While many South Africans have dragged her for sharing her thoughts, those who know her reverence of him will understand why she could no longer watch South Africa crumble while saying nothing about it.