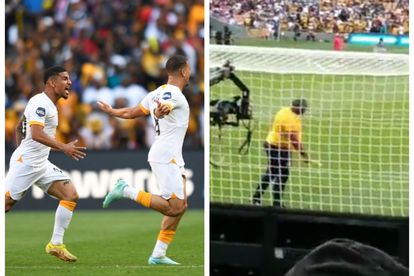 Kaizer Chiefs is accused of using muthi during their 0-1 win against Orlando Pirates in the Soweto Derby. Image via Sydney Mahlangu/BackpagePix, @kabelomolekwa6/Twitter

Kaizer Chiefs is accused of using muthi during their 0-1 win against Orlando Pirates in the Soweto Derby. Image via Sydney Mahlangu/BackpagePix, @kabelomolekwa6/Twitter

Kaizer Chiefs’ victory over their rivals, Orlando Pirates, on Saturday 29 October at the FNB stadium in Johannesburg is still on the Amakhosi supporters’ lips.

But, following a video shared on social media by a fan who was at the stadium, Twitter users are convinced that the Phefeni boys used muthi to win 0-1 against the Buccaneers.

The Soweto Derby is one of the most anticipated matches on the Premiere Soccer League (PSL) calendar as both Kaizer Chiefs and Orlando Pirates do not only play for three points but for bragging rights too.

ALSO READ: What Billiat told Maart before the goal

Currently, the team from Naturena has those bragging rights as they beat their Orlando rivals on Saturday after Yusuf Maart scored a cracker after realising Siyabonga Mpontshane was metres away from his goalline.

Their win has now been slightly tainted by a video showing their official spraying what many believe is muthi during the half-time break on Saturday.

While it isn’t clear what exactly was in the bottle the Kaizer Chiefs official had in hand, the video does show him walking along the goalpost as he sprays the liquid.

In the video, fans witnessing the act can be heard shouting “moloi” — which is SeSotho for witch or wizard.

IS THIS AN OLD VIDEO?

When the clip was shared, some Kaizer Chiefs fans took to the comments section to claim the clip was old. However, it is not.

Another soccer fan also claimed to have seen the act and caught it on camera. From his angle, dancers and a musician can be seen performing as the Kaizer Chiefs official goes to work.

The musician in the clip is Robot Boii — dressed in a cerise pink outfit from head to toe — as he performs his hit song Salary with choreography Bontle Modiselle and her dancers.

The celebrity dancer shared a mash-up of the performance on Instagram on Sunday with the caption: “Location? The Soweto Derby – HALFTIME Show Entertainment baby!!! What an incredibly [sic] honour, sharing the stage with @robot_boii 🚦 and our amazing dance team.”