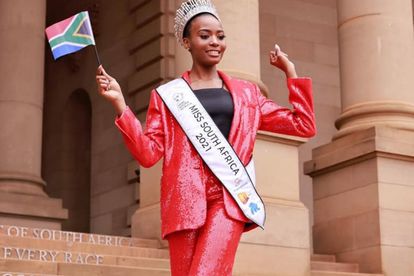 But tweeps are calling the official statement “tone deaf” amid the current hostile climate and are even demanding the organisation – and Lalela –  to dissociate themselves as an “ambassador” of the country.

Miss SA organisers clapped back at criticism of Lalela Mswane leaving for Israel — which has been likened to an “apartheid state” — to pursue her dreams of competing at the Miss Universe pageant.

The organisation’s CEO Stephanie Weil also slammed “bullies” who were trying to deter her goal.

The statement read: “Mswane has spoken out openly about being bullied as a child. She will not be bullied as an adult against fulfilling her ambition”.

“Anyone who wants to rob Lalela of her moment in the spotlight is unkind and short-sighted. She is the shining beacon for young women everywhere, showing them that being beautiful while being clever and educated is very possible.

Organisers also  used the opportunity to distance themselves again from politics and their implications of competing in Israel.

The Miss SA statement was met with a ton of backlash from angry tweeps who criticised the organisers’ choice of words.

“If @Official_MissSA insists that it’s not a political organisation and the winners should not be drawn into politics… 1. They should not ask political questions during the pageant. 2. Stop calling the winner an ambassador for South Africa. 3. Stop using the country’s name. PERIOD.”

“So if Miss SA is not a political organisation and does not hold any political stance…why do they ask the finalists about their views on various POLITICAL issues during the pageant/competition as part of the final selection process?”

Another tweeted: “This is incredibly disappointing @Official_MissSA. Heartbreaking, actually. You are carrying the SA flag and the SA people are not in support of legitimising apartheid states”.

Despite the backlash, a few fans supported Lalela Mswane – who has deactivated comments on her own Instagram account – and her dream to compete at the Miss Universe pageant in Israel.

“She deserves to have her dreams come true and she will represent her country so very well. Supporting you all the way Miss Lalela.”

“Yes, I love this CEO. Can she be my CEO as well…thank you Stephanie Weil for speaking up and clarifying the matter.”

“Ignore the distractions! Let God be your center and show the world your beauty within and beautiful radiance without!”