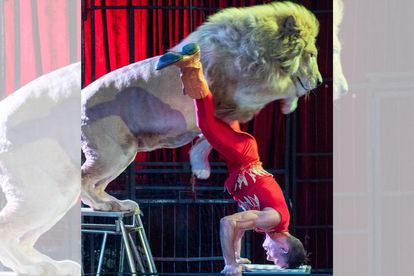 The McLaren Circus has had its event permit revoked after a report by the SPCA yielded alarming results.
Image via Facebook
McLaren Circus

The McLaren Circus has had its event permit revoked after a report by the SPCA yielded alarming results.
Image via Facebook
McLaren Circus

Hailed as “The Greatest Show on Earth”, the McLaren Circus has been forced to shut down shop after the SPCA’s investigation revealed alarming findings.

This, after animal rights activists staged a protest outside the travelling circus in Muizenberg, Cape Town, last weekend.

The McLaren Circus, which was meant to run from 23 March to 3 April, was shut down on Tuesday 29 March. The City of Cape Town withdrew the event permit after the Cape of Good Hope SPCA conducted a welfare check on Monday.

The circus — owned by David McLaren — boasts a number of animals in its shows, including lions, tigers, horses, ponies, goats, pythons, alligators and dogs.

Last week Saturday, a group of 100 animal activists gathered to protest for the McLaren Circus to be shut down in Muizenberg.

According to IOL, protesters held placards that read: “The circus is NOT fun for animals” and “You get to go home afterwards, the animals get a cage”.

Joining the protest, was organisation Beauty Without Cruelty (BWC), which aims to educate and inform the public about the exploitation, abuse and suffering of animals.

BWC chairperson Toni Brockhoven told IOL: ““Ther animals are kept in cages, especially the wildlife. Animals can go to a sanctuary and live out their lives naturally. There should be no human interference or interaction with wild animals unless medically necessary”.

McLaren Circus spokesperson Karl Hildebrandt responded to the claims made by BWC, citing: “What is natural for any animal born in captivity? Our beautiful animals are hand-raised in the circus environment and this lifestyle has become their ‘natural’.”

“Because our animals are captive-bred they would never experience the “wild”. They are fully dependent on us humans to protect and care for them. We have a retirement facility in Meyerton, Gauteng where we already house our retired circus animals.”

According to reports, the McLaren Circus’s permit was suspended after SPCA released a damning report following an investigation.

Concerns were raised about the three French Poodles and their dental state.

The animals, particularly the lions and Bengal tigers lacking environmental enrichment. The SPCA noted that this should be changed regularly to keep the animals interested and occupied to alleviate captive stress.

The animal enclosures/cages of the animals were found to be unhygienic and have a putrid smell.

Meanwhile, David McLaren has hailed the negative press around the McLaren Circus as a “witch hunt”.

He told Cape Talk: “The SPCA, especially the Cape of Good Hope SPCA, have a witch hunt after me. They have been for years trying to nitpick and find fault with my circus to continue the fear campaign against my circus because they are also opposed to the use of animals in circuses.

“The animal rights movement is going to do nothing but smear me and make me look bad. They are trying everything in their power to stop my circus. They are also very upset that people do support the circus”.

In a Facebook post, the McLaren Circus also claimed that “most of the points listed on the warnings were minor concerns and were attended to within a matter of minutes”.

#Muizenberg: We are sorry to announce the postponement of our shows. We have received a notice from The City of Cape…

The circus is offering a refund to those who are in possession of tickets.