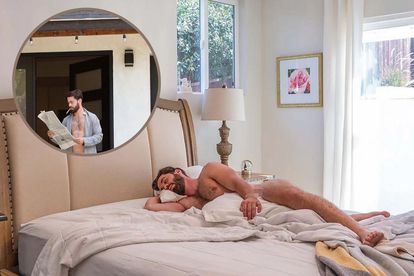 A realtor in Los Angeles found success after his elaborate marketing campaign proved to be quite successful. Yes, David Ferrugio shared his latest R19 million listing together with a full-on NSFW naked photoshoot of himself inside the home that is up for sale.

The realtor, who has been dubbed “ballsy” by the Mail Online, posted his latest listing on Instagram which features a three-bedroom, two-bathroom home in the Monterey Hills neighbourhood for $1.29 million (about R19 million).

“My clients are aware who they hired and my style of marketing,” Ferrugio told The Post. “They are fantastic people.”

The photos reportedly had a lot of range: One showed Ferrugio dressed in a wide-open grey fleece robe with nothing underneath, paired with black suede slippers.

“I asked them to ‘bear with me’ on this idea,” he added. “It was definitely shocking at first but I explained with conviction that I believed it would work. It’s just a tongue in cheek, fun marketing idea that we all game planned and ultimately thought it was a good idea to implement and they were on board.”

Another cheeky photo was taken in the kitchen, where Ferrugio can be seen scrambling some eggs with just an apron on. Another photo shows Ferrugio fully naked with a duvet in between his legs on the bed of one of the bedrooms.

“I’m aware a unique push like this is not for everyone, but I know my intentions behind it were nothing but good. And again, to get the property out there,” Ferrugio said. “And, it worked.”

The listing worked, with some people claiming that he has now changed the realtor game forever.

“Bruhhhh u just changed the realtor game forever,” one Instagram user said in the comment section. “Killing me! I bet you have over 20 offers now!”

“Oh, I zoomed in. Any need for a photographer’s assistant?” others quipped. “I’m officially convinced real estate is for me now…” said another.