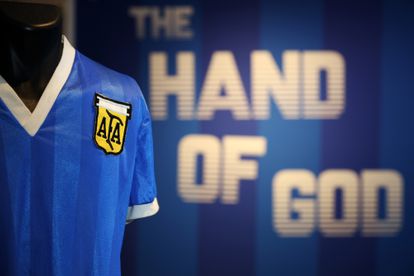 Photo taken on 20 April, 2022 a football shirt worn by Argentina’s Diego Maradona during the 1986 World Cup quarter-final match against England, is pictured during a photocall at Sotheby’s auction house in London ahead of its sale. Photo: ADRIAN DENNIS / AFP

Photo taken on 20 April, 2022 a football shirt worn by Argentina’s Diego Maradona during the 1986 World Cup quarter-final match against England, is pictured during a photocall at Sotheby’s auction house in London ahead of its sale. Photo: ADRIAN DENNIS / AFP

The jersey that Argentina football legend Diego Maradona wore while scoring twice against England in the 1986 World Cup, including the infamous “Hand of God” goal, was auctioned for $9.3 million (about R146.6 million), a record for any item of sports memorabilia, Sotheby’s said on Wednesday 4 May.

Seven bidders vied for the garment in an auction that began on 20 April and ended Wednesday morning, Sotheby’s said.

Sotheby’s head of streetwear and modern collectibles Brahm Wachter said in a statement after the sale.

“This is arguably the most coveted football shirt to ever come to auction, and so it is fitting that it now holds the auction record for any object of its kind,” he said.

The jersey had been owned by opposing midfielder Steve Hodge, who swapped his jersey with Maradona after England lost 2-1.

‘The Man with Maradona’s Shirt’

Hodge, whose autobiography is titled The Man with Maradona’s Shirt, has for the past 20 years loaned the jersey to be on public display at the National Football Museum in Manchester.

The quarter-final showdown became etched in football lore for Maradona’s two goals — one notorious and one sublime — in Mexico City’s seething Aztec Stadium.

ALSO READ: Is social media a threat to journalists? Nobel laureate has the answers

Maradona’s daughter cast doubt on the sale earlier this month when she claimed that the shirt put up for auction had been the one her father wore in the goal-less first half, not the second when he scored his two goals.

“This former player thinks he has my dad’s second-half jersey, but it’s a mix-up. He has the one from the first half,” his daughter Dalma said.

Sotheby’s insisted they had the right shirt, though.

The photomatching process had involved matching the shirt “to both goals examining unique details on various elements of the item, including the patch, stripes, and numbering.”

It added that Maradona himself had acknowledged the provenance of the shirt himself, in his book “Touched by God,” and he recalls giving it to Hodge at the end of the match.

The previous record for a game-worn shirt from any sport was $5.6 million (about R88.3 million), set in 2019 for a jersey Babe Ruth wore while on the New York Yankees.

Until now the auction record for any sports memorabilia was the original autograph manuscript of the Olympic Manifesto from 1892, which sold at Sotheby’s for $8.8 million (about R138.7 million) in December 2019.