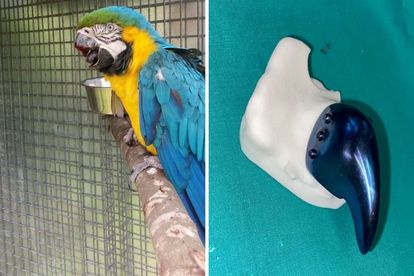 Max, the Macaw who got a 3D-printed beak. Image: University of Pretoria

Max, the Macaw who got a 3D-printed beak. Image: University of Pretoria

Many people get prosthetic titanium limbs as a result of illness or injury. Now, thanks to a University of Pretoria (UP) team led by Professor Gerhard Steenkamp, a veterinary specialist in dentistry and maxillofacial surgery at the Faculty of Veterinary Science, a macaw has been given a new lease of life with a 3D-printed beak.

Meet Max, the Macaw who got a 3D-printed beak

According to a press release from the University of Pretoria, Max, a blue and gold macaw from a bird sanctuary in the Western Cape, received a fully functional 3D-printed prosthetic beak after getting into two scuffles with other macaws, during which his beak was first damaged, then ripped off. The fisticuffs occurred in two separate incidents a few years ago.

“Max is doing well, and no complications have been seen with the beak so far,” said Prof Steenkamp, who was recently part of a team that performed the first CT scan on a live adult rhino at the Onderstepoort Veterinary Academic Hospital (OVAH). The macaw’s owner, Trevor Glover, based in the Western Cape, said that within a day of surgery, Max was eating solid pieces of food. “This is quite a change from eating only soft food for years,” he added.

The groundbreaking surgery, believed to be the first of its kind in South Africa, required a collaboration with Bloemfontein’s Central University of Technology and industry partners. The work spanned nearly two years due to the lockdown arising from the COVID-19 pandemic.

“Max was brought to the sanctuary in 2017 after his owner moved overseas,” Glover said. “He was aggressive towards the rescued birds and during hormone season at the end of 2017, he attacked a macaw that retaliated by biting his top beak and cracking the left side from top to bottom.” Max was then placed in a transition aviary, along with another macaw who had an injured beak. “But in the third week together, they got into a fight, with Max’s weakened beak being ripped off completely,” Glover explained.

Max, who is estimated to be close to 20 years old, and the broken-off beak were taken to local vet Dr Brendan Tindall for treatment and evaluation. But, following intensive care, trouble struck a few months later as the bottom of Max’s beak continued to grow straight out, with nothing to wear it down. “The bottom of the beak grew longer than Max’s tongue; this prevented him from reaching his food,” Glover explained. “Brendan then started a routine cut-back of the bottom beak.”

A CT scan later determined if there was enough remaining beak and bone for a prosthetic to be attached.

Philip van der Walt of BunnyCorp proceeded to develop and draw the beak, and once they had the final drawings, the search began for someone to print the beak and make the particular screws for us.

What made the beak different was that they developed three anchors that passed through the printed beak, all the way across the beak and locked into the prosthesis on the far end. This “locking mechanism” has never been described in birds.

Prof Steenkamp explained that moulds of the stump had to be made several times to check if the beak stump had changed. The surgery lasted just over an hour. “It is amazing what can be achieved with 3D printing,” he said. “I am happy to have been part of the team that has given Max a second chance in life and would like to thank our industry partners.”

Max has returned home to a special aviary that Glover has built for him. “I am very grateful for the help, kindness, advice and dedication given by the team led by Prof Steenkamp,” Glover said. “Max has been given a new lease of life and has gone back to relatively normal behaviour – eating, flying and climbing as he did before the injury. My heartfelt thanks to all.”