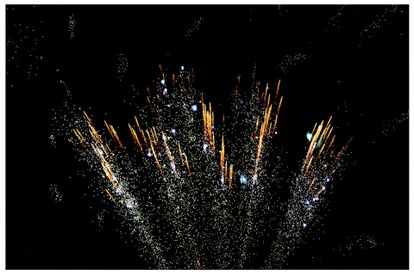 This article is not for sensitive viewers. The Animal Welfare Society of SA has warned citizens of South Africa about the dangers of firework displays, especially when it comes to pets.

The Animal Welfare Society of SA warned residents by sharing the details of a tragic incident, which saw FaFa impaled on a fence after he was spooked by a loud firecracker.

It is believed that the loud bang caused him to panic and flee before he got stuck on a garden fence, the group writes.

“His owner found him hanging from the top of the fence, writhing in pain with one of the metal spikes through his penis. The pain was so excruciating and he was so frightened that he wouldn’t allow anyone near him so they called us for help.”

It is said that what happened to FaFa was avoidable and should serve as a stark reminder as to the potential dangers of revelling with fireworks.

“FaFa is back home, but he will never really be the same and we implore everyone to please heed our many warnings and to kindly refrain from any form of celebration that involves fireworks – especially crackers that terrify animals.”

Illustrating the dangers of fireworks

The group later wrote that the “nightmarish” photo was taken and supplied by the owner and “clearly illustrates the dangers of fireworks”.

The Animal Welfare Society of SA said that they are “bracing ourselves for a long day” as Diwali and Guy Fawkes celebrations kicked off in SA and over the world.

A spokesperson for the Cape of Good Hope SPCA Belinda Abraham said that it has become increasingly evident that reckless individuals are using both ‘events’ to utilise fireworks in a, particularly anti-social manner. This includes ignoring any restrictions and causing damage to property, as well as terrifying communities and animals.

That’s why anyone with an animal is requested to be responsible, and to ensure the animal’s safety and comfort.

“The hearing of animals is far more acute and sensitive than the hearing of a human. If a dog can hear a grasshopper eat, imagine what a firework sounds like,” she said, according to IOL.

Also Read: This is when you can legally set off fireworks in eThekwini

In light of these celebrations, Jacqueline Boyd, a senior lecturer in Animal Science at Nottingham Trent University in Nottingham, England, shared her top tips in order to help keep your pets safe. You can find out more over here.