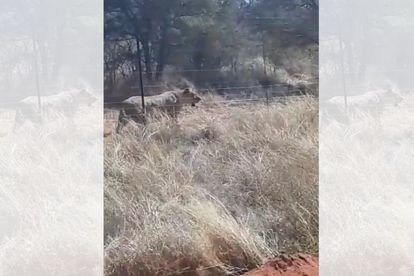 A lions and lioness from Baltimore outside Lephalale in Limpopo are still at large after they made their escape from a private game farm nearby on Friday 1 October.

According to the SABC, farmers and workers are living in fear in Baltimore after the two lions were seen roaming on farms in the area on .

National African Farmers’ Union chairperson Motsepe Matlala told the public broadcaster that their members had to use tractors to stop the lions from straying into cattle farms on Sunday evening.

Matlala says the owner of a private game farm where the lions are believed to have escaped from, as well as the authorities have been informed.

‘Humans and livestock in danger’

“The farmers found the lions on one of the farmers’ farms, they could indeed confirm that the lions have escaped from the nearby farm. The owner of the lions was informed and requested to come to the scene. He didn’t however come. We would like to appeal as the National African Farmers’ Union of South Africa to the authorities to come to the rescue of our people,” says Matlala.

Matlala later told Jacaranda that they are waiting for confirmation that the professionals are in the area to catch the lions because “lions aren’t just animals you can catch”.

“Lions are dangerous and we hope the process will begin as soon as possible as the lives of livestock and humans are exposed to danger. We are mindful of the fact that all of us as farmers are running businesses and don’t want to lose our livestock,” Matlala said further.

SABC journalist Jabulani Baloi later shared a video of the lions on Twitter. The footage shows the lions roaming about on a farm nearby:

Earlier this year, a lion named Kwandwe escaped from the Dinokeng Game Reserve. After he was darted, the lion was returned to safety.

In July 2021, Kenyan wildlife officials also captured a lion that escaped from a game reserve in Nairobi. The lion made it all the way into residential areas, frightening commuters in a town south of the city.

*This is a developing story.