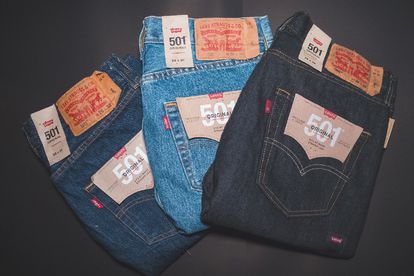 Levi’s jeans from the 1880s with a ‘racist’ slogan sold for R1.4m. Image Unsplash

Levi’s jeans from the 1880s with a ‘racist’ slogan sold for R1.4m. Image Unsplash

It’s no secret that fashion trends come and go quite frequently, but would you buy a pair of vintage jeans from the 19th century for a whopping $76 000? That’s R1.4 million in South African rands!

According to the Wall Street Journal, a pair of Levi’s jeans from the 1880s was recently sold to 23-year-old Kyle Haupert at an auction in New Mexico, United States, for that amount on 1 October.

Kyle Haupert is a vintage clothing dealer from San Diego and speaking to Wall Street Journal, he said that he, too, was surprised that he bought the pair of jeans.

“I’m still kind of bewildered, just surprised in myself for even purchasing them,” he said.

NBC reports that the item was found in an old mineshaft in northern New Mexico.

When compared to the price of the lowest priced jeans currently available on the Levi’s online store, the antique jeans were sold with a winning bid that was more than 1 144 times more.

Haupert, who paid for 90%, actually bought the jeans with Zip Stevenson, the owner of vintage clothing company Denim Doctors, who paid the remaining 10%.

The Levi’s jeans have splatters and holes, but are mostly still in good condition. Imprinted on the inside pocket are the words, “the only kind made by white labor” — a racially-charged slogan used by the company during a time of pervasive anti-Chinese discrimination in the US, the Wall Street Journal reported.

“It comes out of intersecting strands of racializing the Chinese as inferior, as ‘disease carriers,’ as economic competition,” said Dr. Catherine Ceniza Choy, a professor of ethnic studies at UC Berkeley.

“One of the things that we can learn is that the current surge in anti-Asian hate and violence against Asian Americans, especially around what has been called the ‘Chinese virus’ is not new.”

In a statement, however, Levi’s said that it did that to “improve sales and align with the views of consumers at the time.”

“This continued into the 1890s, when we reversed our policy,” the company officials said.

The clothing company also explained that it is fully committed to “advocate for real equality and to fight against racism in all its forms as it persists today.”