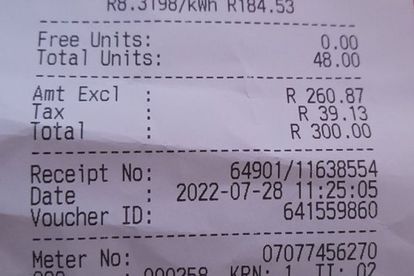 ‘I paid R300 and only got 48 units for electricity’: Tembisa mom. Image via Twitter @MakhumaloShado

‘I paid R300 and only got 48 units for electricity’: Tembisa mom. Image via Twitter @MakhumaloShado

South Africans are sympathising with a Tembisa resident @MakhumaloShado, who shared on Twitter that she paid R300 for 48 units of electricity which only lasts for three days.

IOL reports that Tembisa residents are currently protesting over “expensive” rates and high electricity bills and have shut down the East Rand township, blocking roads and burning tyres. Three people have also died from the protests.

South Africans are also surprised by the low 48 units of electricity the Tembisa mother received for R300 and shared their own stories of electricity units they receive, which seemingly prove that Tembisa residents are being charged more for electricity.

“I paid R300 only get 48 units of electricity in Tembisa which lasts only for 3 days. Siyanyelwa straight” (they’re bullsh*ting us).

This after Johannesburg City Power revealed on 4 July that they’ve increased electricity tariffs by 7.47%.

All City Power tariff subcategories are increasing by 7.47%, except for the business convention tariff that has been limited to 4.4% to gradually align with the National Energy Regulator of South Africa (Nersa) benchmarks for the particular customer category.

“Should u exceed the 700 KWU before month end and u need to buy some units, then they will charge you R8.90 per unit. Hope I make sense.”